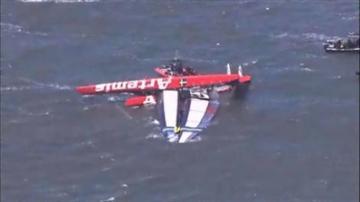 It happened while Simpson was practicing for the upcoming America's Cup race.

"Tragic day. Someone that’s very well known and well regarded as an expert racer and every one worked really hard to not have this outcome. These are alwasy difficult things to report. Our hearts go out to the family of the other racers at Artemis," said an Artemis Racing official.

Artemis racing CEO said his thoughts and prayers are with the Simpson family.