One birthday at a time: Local family takes on child's terminal illness 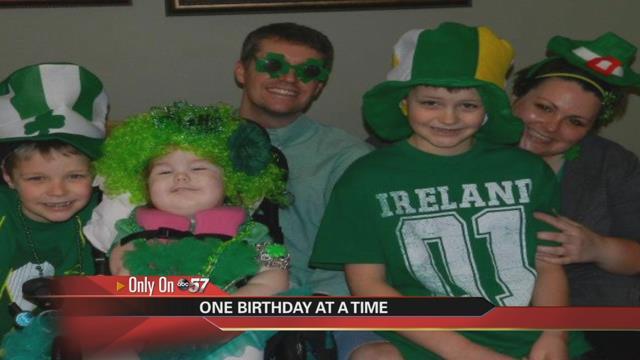 At just a few months old Ella Hunt was diagnosed with a rare disease that would leave her completely dependent on others to survive. It's what her parents have made of this painful journey that has become truly remarkable.

Ella, like most 4-year-olds, loves to get her picture taken -- especially on her birthday.

When we went to meet the Hunts, the family was celebrating 51 months that Ella has defied a terminal diagnosis and brought them closer than they ever could have imagined.

"As discouraging as it could have been it just still feels so miraculous," said Erica.

Before Ella, Dan and Erica Hunt were already the proud parents of two healthy boys.

"We just decided that Ella would be one last hurrah," said Erica. "One last let's see, and we ended up pregnant in like three weeks."

Shortly into the pregnancy they got the surprise of their lives. They were about to add a little girl to the family.

"We had the big cupcake reveal and I was certain it was a boy," said Erica. "So when we all bit into the cupcake and it was pink it really set in that oh my goodness this is going to be a girl."

That excitement would soon turn to worry.

"For me my uncanny sense of mom intuition told me about eight weeks in and I was actually at a concert and we were at intermission and I don't know," said Erica. "Something inside me said something is not right with Ella."

It wouldn't be until a few months after the birth they would learn Erica's intuition was right.

"Right around ten weeks I felt like she was starting to hold her head up and it seemed like she got stuck and never progressed and it was real concerning," said Erica. "So we started making phone calls."

The doctors at Riley Children's Hospital told the Hunts there was a chance Ella could be battling Spinal Muscular Atrophy, more commonly known as S.M.A. It's a disease that robs people of their motor nerve cells taking away the ability to walk, eat and even breathe.

"By noon the next day it was confirmed and they said she would die in my arms or die in her sleep," said Erica. "That's how we were sent home."

Dan added, "The prognosis was that she would probably live six to eight weeks no longer than a year is what they told us."

The Hunts were shaken to the core, but not for long.

Erica decided to do her own research. Through support groups on Facebook she learned children with S.M.A were living much longer than the doctor's grim prognosis, but it wouldn't be easy.

"Full-time care. Pretty much," said Dan. "You're taking care of somebody who can do nothing on their own."

Even as Ella seemed to be defying all odds -- the losses continued.

"Ella lost her swallow right around ten months of age due to atrophy of the disease and so choking is a real challenge for us, because she can't manage her own secretions," said Erica.

We had to stop several times through the course of our interview to do what the Hunts call suction -- something that's now become a part of their daily lives. Balancing that daily life and Ella's condition has been a struggle.

The Hunts built their current house with Ella's care in mind. Her room comes complete with a nurse’s station and all of the machines and medical care needed to keep her alive.

"She is on a ventilator or bipap at least twelve hours a day to help fully expand her lungs and so we have several pieces of equipment that do go with us whenever we leave and are also in the room here," said Erica.

Ella needs those machines close by at all times in case life-saving measures are needed -- something the Hunts are no strangers to doing.

"It's absolutely scary," said Erica. "It's hard for me to talk about because the last three months have been really tough. She's choked a lot and we've had to stabilize her a lot. Just last week on the way to trick or treating she went unconscious on us in the garage trying to load her in the van."

Knowing how fleeting their moments with Ella are -- they decided to start celebrating her birthday once a month.

"The minute I saw Ella I fell in love with her," said Cindy Streich.

Their close friend Cindy has played a huge role in the planning. Cindy and the Hunts connected on Facebook and one day Cindy decided to pay the family a visit.

"I said to Erica -- I am here to serve your family and I have been with them ever since," said Cindy.

She has now become an extended part of the family and one of Ella's closest friends.

"I just really love being a part of her life," said Cindy. "She is just so precious to me and we just have such a good time together."

When asked who her best friend was, Ella managed to reply with a faint but clear -- Cindy.

"We've had a Cinderella party, a ladybug party, a turkey party, an owl party and I just want to make each party as special as I can for Ella," said Cindy.

Erica added, "We will have time to mourn her when that comes, so why mourn the loss of what we think it should have been when we have now."

"It's just a matter of just recognizing that time is short no matter what your time is and just enjoying the life that you do have," said Dan.

As the weeks turned to months and months turned to years -- the Hunts only became more aware of how precious their time was.

"Life is important and every day is important," said Dan. "What I have learned from Ella is the fact that sometimes it's just the simple things. Sometimes she just wants somebody to talk to her, just to read a book to her, just to grab her hand and sing to her. You don't have to have all these different things just to enjoy life."

As Ella blows out the candle on month 51, her family doesn't look to the future, they remain firmly planted in the present.

"There's nothing more amazing than right now and you can't convince me that tomorrow has anything better to offer," said Erica.

There is some hope on the horizon. There are nineteen drugs that are in clinical trials. Some that have given children enough strength to operate manual wheelchairs on their own.