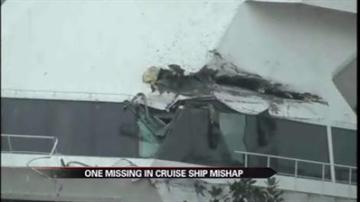 MOBILE, Ala. -- More trouble for the Carnival Cruise lines and its ship Triumph.

Hurricane force winds broke the ship free from its moorings while in port at Mobile, Alabama Wednesday afternoon.

The triumph traveled down river for two hours before coming to rest against a cargo ship.

800 workers were on board that ship.

One employee's sister says it was a frightening trip.

"He heard the winds whirling around real fast and he was real scared and everybody started panicking. He told them to calm down," said Anetrice Hopkins, brother works on ship.

The mishap comes less than two months after the ship broke down at sea with thousands on board.

Everyone on board Wednesday is okay but that storm threw two dock workers into the water.

One person was rescued but the Coast Guard has suspended the search for the other worker.