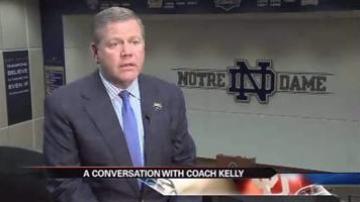 Jillian: You’re dealing with 18 to 20-year-old guys here, how do you find that balance between keeping them confident enough to go into this game knowing they can beat anybody, but at the same time keeping them humble enough to know they have to keep their nose to the grind?

Coach Kelly: Well, first they have to experience it. They have to have done this before, which they have so it's already something they've been through on the road against Michigan State. They had to go and play a team like Stanford where they hadn't won in a few years. So you have the combination of Michigan State and then playing a team that handled them in years past like Stanford. That prepares you to go against teams like Oklahoma.

Jillian: As a head coach, how much do you have to kind of play the role of psychologist when you go in there and you have those big talks, those pep talks? We've seen a lot of them and you seem pretty good at it.

Coach Kelly: It's 24 hours a day, seven days a week. It's just different talks sometimes it might be about academics, it might be about school, it's nothing to do with football. So it's just part of the role. I would say at the end of the day this is more about our guys understanding why
they came to Notre Dame, they want to play in these kind of games and they have confidence and they’re a confident group or they wouldn't be here at Notre Dame.

Jillian: You also talked at the beginning of the season about how you wanted to be more of a hands-on coach than you’ve had in the past and that's just your style. How have you seen that work out for you so far this season?

Coach Kelly: Well I like it. It's more satisfying for me that I get more time with my players because that's why I got into this business. Not to just be a CEO and manage the program from afar. Certainly that's a part of being the Head Coach at Notre Dame. It comes with that. You’re not going to change it, but I've carved out enough time and I've said no a lot more to things which allows me more time to spend with the players. I like that because I have a closer relationship with our football team.

Jillian: You talked a little bit about the excitement going into this game, it's obviously everywhere. It's all over ESPN there's a lot of hype about it. This has just got to be fun. This is what college football is all about.

Coach Kelly: These guys have now been College GameDay guests now for two out of the last three weeks. And you rather be on that side of the story instead of not being relevant. And so being relevant and being really in the focal point as it relates to college football is really where we want to be now we have a lot of football left in front of us. But this is clearly where we want to be. We want to be in the spotlight.

Jillian: You've talked a lot about also taking one step at a time, one play at a time, one game at a time, you know how much more do you have to focus on this game and that process in order to get through this game.

Coach Kelly: Less this week than maybe against BYU where they know Oklahoma, they know about their tradition, they know how good they are as a team. I think we spend less time on that and we spend more time on some of the other games but particularly this week they know the opponent they better be ready to play or they'll get beat.

Coach Kelly: "Well first I demand it. You get what you demand so on a day to day basis when we got here, whether it was keeping a tidy locker room or making sure they are on time for meetings.
and classes and holding them accountable on a day-to-day basis that's how you get that toughness..that what i call that winning edge. and our guys have that because of the way they
handle themselves on a day-to-day basis..but it starts with demanding it. and we demanded it..and were vocal about it the first couple of years..haven't had to be as vocal this year because
they clearly understand what they need to do."