One year later: No arrests in murders of Jarina Bailey, Dominique Jackson 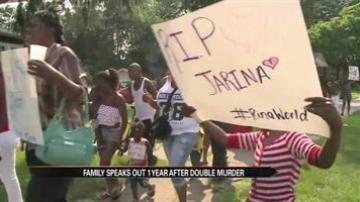 SOUTH BEND, Ind.-- Family and friends held a peace walk on Monday to remember Jarina Bailey and Dominique Jackson who were shot and killed one year ago. Metro Homicide believes these killings were a result of gang violence but no arrests have been made.

Jarina's mother said she still hasn't come to terms with the reality that her daughter was murdered.

Katrina Bailey said, “My last memory was her coming over on July 20th because it was her sister’s birthday and we sat on the porch and had a couple of laughs and then later on that night early in the morning she was gone.”

“I don’t know anything, just that she was gunned down at a car wash last year," said Katrina.

MarShawn Hughes said, “It’s a tragedy that our youth today have to resort to guns over petty reasons and then not even hit their target and families are hurt and scarred from this."

If you have any information regarding this investigation call Metro Homicide.