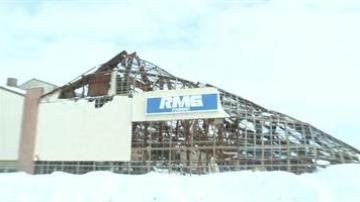 MISHAWAKA, Ind. -- It has been one year since Mishawaka's RMG Foundry building, and all that was stored inside it, went up in flames. The investigation and insurance battle are still going on.

"It will go down as one of the biggest fires for the city of Mishawaka," said Schafer.

The RMG Foundry building was being used to store cars, boats, RVs and other personal belongings.

"There are a lot of remnants of the vehicles that were in there," said Schafer.

One company that was hit hard by the fire is Starboard Choice Marine. More than a hundred of their boats were damaged in the big blaze.

No one with the business would speak on camera, but owner Steve Peterson said they are still waiting for answers.

"With the amount of devastation at the facility, I believe it is still ruled undetermined," said Schafer.

Schafer says demolition has to wait until the insurance companies finish their investigations.

"Once everything is finalized with the insurance company, then they will start the process of doing some demolition along with showing up areas where people might want to get their items out of the facility," said Schafer.