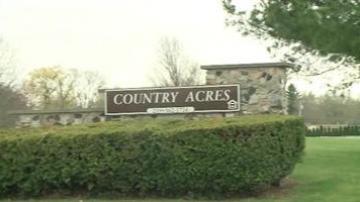 LAPORTE, Ind. -- Tuesday night, LaPorte Police responded to the Country Acres Apartments on reports a one-year-old was wandering around outside, alone and wearing only a diaper.

According to police, when they arrived, they found the father holding his one-year-old son. The father told police he and another woman left their children in the care of a third woman while they took his eldest son to school.

When they returned, they found out the one-year-old had been wandering around without supervision.

Witnesses told police they found the one-year-old and went to the apartment where they thought the baby was staying and found a woman passed out with a beer in her hand.

“My daughter was sitting on the porch, she came in and she said she found a baby. The baby had walked up to her," said Angela Shove.

The father told police he and the two women had been drinking the night before but did not think the woman who was supposed to be watching the children was still intoxicated.

Officers questioned the woman, Janice McGrew, about why she wasn't watching the child.

“She denied having care of them, basically she said they weren’t left in her care," said Sergeant Paul Brettin of the LaPorte Police Department.

Police say they aren’t buying it.

“Know who you are leaving your children with. You can only claim ignorance so long," said Brettin.

Angela says she is outraged by the father's actions.

The LaPorte County Prosecutor is currently reviewing the case to determine whether charges will be filed.