Only bank in downtown Wakarusa closing 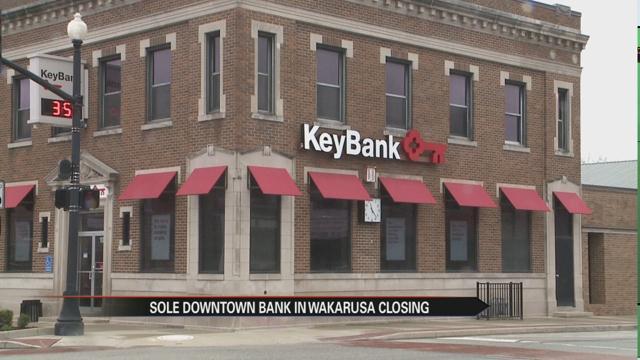 The only bank in downtown Wakarusa is closing and residents, business owners and city officials all agree this is going to have a major impact.

Drez Jennings, External Communication at Key Bank, says it was a business decision based on customer traffic.

But there are those in Wakarusa who think Key Bank corporate is not looking at the effects it could have on the community.

“Every small town has a bank,” says Stanley Cook, owner of Cook's Pizza in Wakarusa.

Wakarusa is a small town of just under 18,000 people; and if the only bank located in the downtown area closes many will be affected. This includes cash -only businesses like the one Cook owns.

“Yea actually I thought it was an April fool's joke,” says Cook.

The letter Wakarusa customers, like Sherrill Glitch, received was not a joke.

The Key Bank Nappanee Branch sent out a letter on April 17th to Wakarusa customers welcoming them to their branch once the Wakarusa branch closes on July 17th.

“I don't want to drive to Nappanee,” says Glick.

Glick is not looking forward to an extra eight mile drive and says banking at the Wakarusa branch allows her to enjoy downtown and run some errands.

“We are not happy at all. It was one of the nice things about this town. You could go to the bank, the library, and it's just all right here. And now they are closing,” says Glick.

Cook says his business has used the bank across the street as a way to remain cash only, avoiding credit and debit card fees, and keeping prices down for customers.

“The bank being across the street that was always our little way out,” says Cook.

Cook explains that many of his customers often run across the street to the ATM if they are not carrying cash.

“With that closing they are going to have to do their banking in Elkhart, Goshen or Nappanee,” explains Troxel.

Troxel has started conversations with other banks to see if they're interested in opening a bank in the area.

In the meantime Key Bank representatives are welcoming Wakarusa branch customers to use their other branches.
Share this article: