Only on ABC 57: Cultural conversations with students 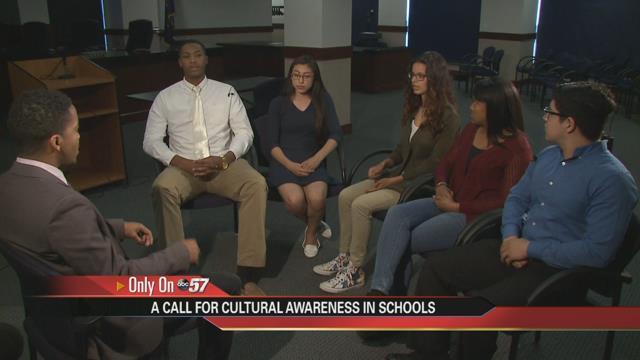 ABC 57 held honest discussions with students outside the classroom.

During an open discussion with almost a half dozen teens, they said the issues facing minority students in our area aren’t black and white.

It’s a conversation that’s oftentimes avoided inside the classrooms.

But they believe these tough talks are needed.

Diversity and inclusion are two ideal most would think are innate at this point.

The students ABC 57 spoke with believe this is true, but what about their teachers, the school administrators, or the district?

“It’s always seen almost as if it’s an issue that’s on the surface so its touched upon but not really acted upon so I feel like we do need to take a stand and we do need to have our voices heard but we also have to have people in the corporation that are willing to listen to our voices,” said Rebekah.

Their voices are more like five whispers when you consider more than 18,000 students make up this district.

Thursday, they were under the microscope and they’re taking a look at where we are in saving our schools.

A lot of the conversation stemmed from some incidents that happened in South Bend Community Schools and other schools in the area.

Some stories went under the radar.

But another incident grabbed headlines.

In February, we first reported a Riley High School student was removed after posting “whites only” and “coloreds only” signs above school water fountains.

Actions, he says, he took to spark a conversation.

But did it go too far?

“For most teachers and elders in our school, they see that as disrespectful. But for us and our generation we think it's a problem but it doesn't really offend us because we didn’t have to go through what our elders went through,” said Brandan.

“It goes so far. My generation would be like 'oh that’s funny, or someone will take it down' but like he said, our elders, they think that's disrespectful and I think a lot of people sometimes take things to that point where they think it's funny but it's really disrespectful and it does hurt people,” said Ashley.

They say it can hurt people, especially when viewed out of context like on social media.

“I feel like social media is what people don't really want to talk about. Like they post and they say what they want, what they want to say, but they’re either too afraid or avoid those conversations and they can't really talk about it,” said Carlos.

But is social media to blame for insensitivity in schools?

The student behind the water fountain signs scandal says he wanted to talk about race after facing his share of insensitive remarks from students in person.

“When I go to track meets like when I run, I’m a sprinter so I have a lot of people who come up to me and ask me, 'oh so are you white? I’ve never seen a white or Hispanic girl run like you.' they kind of label me,” said Ashley.

“They categorize in this stereotypical way, this is how they portray us and I feel that that's not cool at how it's such a joke now and how it doesn't matter and I feel that needs to change,” said Tiana.

Does that change happen naturally?

Or should educators step in?

“I think that teachers in the classrooms also needs to be aware that diversity isn't a setback, like being a minority student isn't something that's necessarily negative although there are obstacles it can actually help a classroom to be able to have more open conversations about diversity and it can actually give other students a different view," said Rebekah.

These students would also like to see those differences explored in the curriculum.

“Most of our history was documented from a Caucasian base and most the history from African Americans either come from a negative background or not as positive as the Caucasian race,” said Brandan.

“It’s something that I feel that us high schoolers are not getting to see until we go into the real world and want to further our education,” said Ashley.

It was clear by the end of the conversation there’s work ahead for South Bend Community Schools.

But every student a part of the discussion said they were hopeful.

“I feel like as a corporation, we can always do better. I just think it’s taking those steps one step at a time to get better,” said Tiana.