Only two speakers working on towns only tornado siren 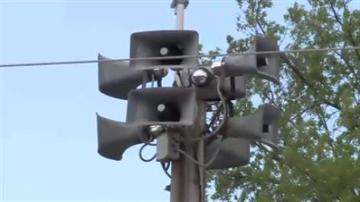 WINONA LAKE, Ind. -- The deadly EF-5 tornado that hit Oklahoma earlier this week had one Michiana town questioning the status of its only tornado siren.

Just above the Winona Lake Fire Department is the town's only tornado siren. It has eight speakers.

After the siren was discussed at Tuesday night’s council meeting, the siren was checked. Only two of the eight speakers are working.

Town Coordinator Craig Allebach says they believe it can be fixed, they just need to figure out the problem.

Allebach says if it's just the speakers, those can be replaced fairly cheap-at $100 each.

“The parts are available. Just an ordinary siren could be sufficient they think,” said Allebach.

It does appear the wiring could be to blame.

"It's possible the speakers there, if rewired might become functional,” said Allebach.

"We'd like to have siren that covers everyone within Kosciusko County but with the price being about $25,000 then we've got to be money conscious from a government standpoint,” said Rock.

Rock says while tornado sirens are the city or town's responsibility, this recent discovery after the devastation around the Midwest-should remind you to be prepared.

"People need to be aware of their surroundings they need to know what the conditions are,” said Rock.

Winona Lake leaders are trying to figure out how far it will have to go to fix its alert system.

The town is also researching weather radios, text notifications, apps, and other avenues to alert its residents to emergencies.