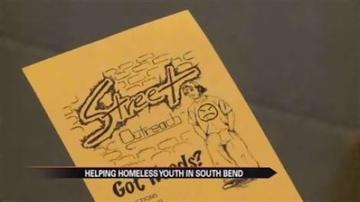 ST. JOSEPH, Ind. -- A local organization is trying to identify the homeless youth in St. Joseph County, Indiana with the first-ever count. The Youth Service Bureau wants to take advantage of the help that is available to them.

"They're like different realities. The one we live in now is rather bleak in my particular view and I like video games because they're an escape,” said Clarkson.

For Clarkson the games help him forget, just for a little while, his everyday struggle to survive.

"I was sleeping under a bridge at one point. On the stairs next to a workout park. In the little tube slide part at a park. And I believe at one point I stayed behind a parking lot next to the library,” said Clarkson.

With no place to sleep at night and no idea when or where he might get another meal, Clarkson dropped out of high school and made survival his full-time job.

"Things will look bleak, very bleak. And sometimes I think it’s not so much that the glass is half empty, but rather shattered on the floor. But at the end of the day, I just got to take it one day at a time,” said Clarkson.

That's where Brady August and the nonprofit Street Outreach Program at the South Bend Youth Service Bureau step in.

"Our goal or mission is to educate and inform young people in need or at risk of becoming homeless,” said August.

Several nights a week, August and another volunteer take their mission to the streets.

"Still coming out and talking to young people about free confidential services for those kinds of needs. Phone number is there and I'm just asking everyone if they know anyone who needs a safe place to stay,” said August. "I figured the only way I'm going to reach those people in need is to reach all young people."

To broaden his outreach, august took to the high schools as well as the streets. He sets up a booth at a different high school each day.

August talks to kids about their friends, families and anyone they may know who is in need.

Ultimately, that's how he is conducting the first ever homeless youth count in Saint Joseph County history.

“We decided we wanted to put together a more quantitative figure on this. So, working with the high schools we had each student fill out trying to identify young people who aren't living at home, aren't being supported by their parents or guardians,” said August.

So far, the results are only in for two high schools. But there are already more than a hundred different kids identified as homeless.

August predicts the final count will be closer to five times that- a statistic that's staggering to almost everyone but Clarkson.

“It has made me realize that these particular conditions are rather indiscriminant. It doesn't matter how old you are, you don't get any shortcuts,“ said Clarkson.

There is help. The Youth Service Bureau has a shelter for runaways and homeless youth. There are counselors, mentors and food all to help kids in need.

“I will say that now that I'm next door at the Safe Station, it's good to have somewhere to sleep at night. That's what really helps. They're helping me to find a job and reinstate my education and if we can get all of this together, I won't be homeless anymore,” said Clarkson.

Clarkson is trying to finish up high school and eventually go to college so he can work in graphic design and create his own video games.