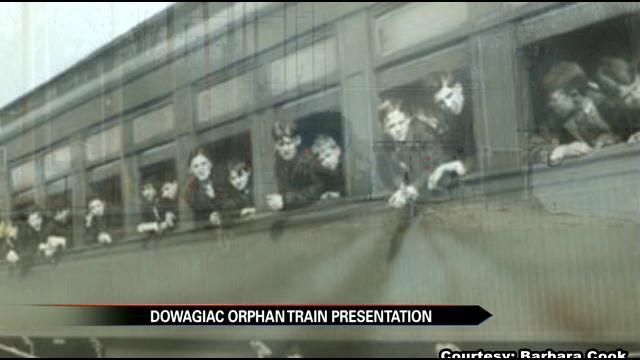 The Orphan Train first stopped in Dowagiac on September 26, 1854.

It was the plan to take homeless children from New York City and send them out West to help them find families.

The effort was part of the Children's Aid Society to help these children find homes and a better life.

When the first train arrived in Dowagiac after traveling four days, the children got off the train and wandered throughout the city looking for food.

“They arrived on a Sunday morning at 3 o'clock in the morning. The train stopped and let the kids off with their chaperones, and the kids were told to sleep on the railway platform," said Orphan Train Researcher Barbara Cook.

Many of the children were boys and between the ages of 10 to 15.

News releases were sent all throughout the city to let people know the children were coming to town.

Then there would be a "meet and greet" where potential families would come to the train station depot to meet the children.

The children would be lined up on the platform in order of their height.

“Some of them which were kind of class clowns would sing or dance to try to attract attention so they would get chosen. If the perspective parents liked the looks of the child they had been paired up with, then they went home with them.”

Wood said that it was common for the prospecting parents to check the children's teeth and their muscles to see how healthy
they were.

In all, about 12,500 children were adopted into homes because of the Orphan Train.

That is where the term "up for adoption" comes from and is still commonly called today.

Although the children were eager to be adopted, many times they would be split up from their siblings.

“One of the real tragedies was the fact that if both siblings were not taken then one got back on the train, and went further on down the road. As a former teacher, I can't even imagine the psychological effects that being split from your sibling would have on you,” Cook added.

The Dowagiac Area History Museum will be having a lecture on the Orphan Train Wednesday night at 6:30.