Osceola man reunited with EMT that helped save his life 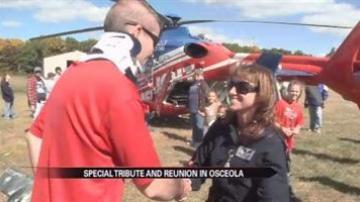 OSCEOLA, Ind. -- Doctors told Ryan Gortney of Osceola that he would likely never walk again after crashing his exhibition racing vehicle on June 3. He was transferred from the Osceola Dragway via Med Flight to Memorial Hospital where Ryan said his family was cautioned he might die from his injuries.

Despite the odds, Ryan Gortney is alive and walking less less than four months since he was severely injured. On Sunday Ryan got the opportunity to meet an EMTs who was one of the first responders on the scene the afternoon of his accident. Owners and employees of the Osceola Dragway helped get the MedFlight Helicopter and emergency staff to land at the dragway so Ryan could see the unit that helped get him to the hospital so fast for emergency treatment.

Gortney, his wife Angee, and his sons Lane and Ty along with close to 100 plus spectators at the dragway got the opportunity to get up close and personal with the staff and the Med Flight Helicopter. The staff on board Med Flight was not the same crew that transported Gortney on June 3. However, Jim Ward, a Baugo Township EMT was one of the first responder that afternoon and he was back at the Osceola Dragway eager to meet Gortney.

Ward said, "It's a bit of a miracle, that he has made it as far as he has so far. When he reached the accident scene on June 3 he said Gortney was in bad shape. "At that point he didn't have any feeling in his legs and he was having trouble breathing," he said.  Ward said Baugo Township called Med Flight before they even arrived on the scene.

Gortney said the day of the accident he remembers, "We were running about 130 miles per hour, the car flipped, turned over, that day we had mechanical failure.I was basically paralyzed from the chest down and they said, 'Ryan you may not walk again', but I knew in my heart and I prayed and I knew that I was going to walk out of that hospital."