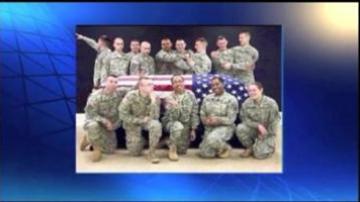 MILWAUKEE, Wis. -- A photo sparked an investigation within the National Guard and sparked outrage on social media

The picture shows a member of  the Wisconsin National Guard posing in front of a flag-draped casket with the caption 'We put the "fun" in funeral.'

Since that photo was posted online, Specialist Terry Harrison has been suspended from her duties on the funeral honor guard team.

"To me, it's just completely unacceptable. It is an outrage. It is unfathomable to me that people who are not just service members, but who were picked to be in this highly specialized area, wouldn't be sensitive enough to realize just how awful that is," said Governor Scott Walker.

The casket was empty at the time the photo was taken.

Harrison has been getting death threats online and over the phone. The guard is taking measures to protect her.