Overall crime down 3-percent from this time last year 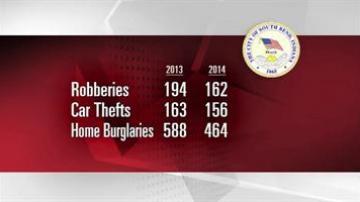 SOUTH BEND, Ind. -- South Bend Police say overall crime is down 3-percent in comparison to this time last year. Even though it's a slight decrease, police say things are going in the right direction.

He has kept a watch on neighborhood crime.

"It is to me, it has gotten up. The way the neighborhoods use to be, they were like family. But then the family was dying off and the young ones are flying off," said Kwiatkowski.

He says crime is down on his street, but says it's still always on his mind.

"The paper, every time I glance in there bang here, bang there, rob here, but it's not here- it's out," said Kwiatkowski.

So how bad is crime?

Stats show, in South Bend, from January to July in 2014 there have been 32 fewer robberies, 7 fewer car thefts and 124 fewer home burglaries than January - July of 2013.

"The incidents of residential burglaries are down. That's a big deal. And when you look at the other categories- that's something that has the potential to affect every single citizen in South Bend," said Captain Phil Trent of the South Bend Police Department.

There have also been three more murders, six more rapes and 27 more aggravated assaults than this time last year.

But that doesn't mean we'll be up for the year.

"Overall crime is down 3 percent from this point last year. And last year crime was down from 2012. So actually over the last decade it has sort of been cascading downward," said Trent.

"I'm glad it's down 3 percent because that means somebody is out there reaching out to these people and saying lets get together and perform a neighborhood watch," said resident Mary Anders.

You can get real-time crime reports here