Owner of truck destroyed in shooting and crash speaks 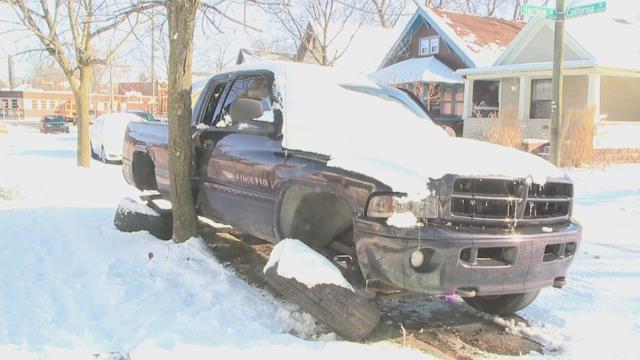 Police are still searching for the suspects who they say fired shots at five pre-teens and teens who were in a stolen vehicle Sunday.

The bystander whose truck was destroyed in the crash is fearing for his own safety.

The truck owner, who wishes to remain anonymous, says the unknown suspect pointed a gun at him.

“I peeked out my window, and I saw a car accelerate, being chased by another vehicle. They didn’t stop at the stop sign. They plowed right into my truck,” the man said.

The truck was slammed into a tree by the impact.

“I ran downstairs. I was actually going to go out and see if everybody was okay, because it was a hard hit. As soon as I took one step out the door, there was a man with an AK 47 pointed at me. I actually had to duck back down into my house. I hit the ground and called 911,” the man said.

Now, South Bend Police are looking for three people of interest in the event that led up to this.

They say five children were riding around in a stolen car, when another vehicle pursued them along Harrison Avenue, shooting at them.

Police are looking for the fifth teen in the stolen car, and two others in the car that was shooting at them.

It’s one of those suspects that the truck owner says he made eye contact with.

“I don’t want to say I’m traumatized, but I mean, it’s been on my mind since it happened,” the truck owner said.

Now he has no working car.

“My insurance won’t cover it, and I don’t know if the other vehicle’s insurance will cover it either,” the man said.

He’s ready to leave his neighborhood for a safer one.

“I am not going to be here too much longer,” the man said.

Police are still looking for the suspects in this case.

They that if you have any information in this case to call Crime Stoppers.