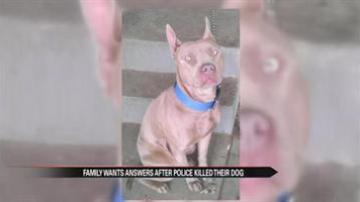 SOUTH BEND, Ind. -- Police shot and killed a dog after it allegedly threatened neighbors and was aggressive towards police. The dog's owners say the dog was harmless.

They say they tried to keep the dog back with a yard rake, but it didn't work.

That's when they made the decision to shoot, to protect the children.

Drake's owners say that doesn't sound like their dog at all.

"I trained him to be around people all the time, he was never vicious so I don't understand it," said Jason Washington, the dog's owner.

Drake's family says they're just disappointed that police haven't reached out to them personally to explain why they made the decision to shoot their dog.