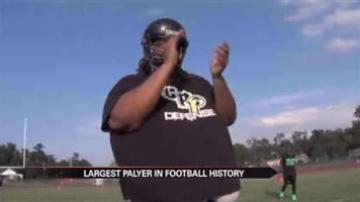 ENOLA, Pa. -- His teammates have nick named him "House."

He could be the biggest football player in the history of the sport at any level.

The lineman says it usually takes two opponents to cover him.

But House claims he is not as powerful as he looks.

He says he is still human but his teammates do not quite agree.

"One time, I actually fell and he fell on top of me. I could have sworn I had two broken ribs," teammate Nate Gibson said.