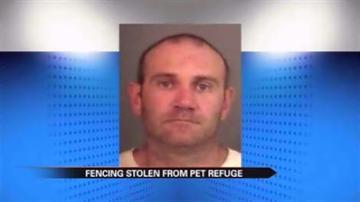 SOUTH BEND, Ind. -- An alert police officer allegedly caught two men stealing construction materials from the future site of a non profit pet refuge on the south side of South Bend. One of the suspects surrendered, the other took off and led police on a high speed chase.

At the site of the future animal shelter, the site supervisor didn't realize what had happened.

"You can see where there was fence piled there by the way the grass is dead and smashed down," said site superintendent Bill Einspahr.

Einspahr didn't realize anything was missing until we told him about the arrest.

"Spots out here is where we had siding stacked that we took off the building and that's missing," said Einspahr.

"Sergeant Krause was patrolling on the south side of the city in the Burnett Drive area," said Lieutenant Pat Hechlinski. "When he confronted them, one of the gentlemen was compliant, the other party hopped into the truck and took off."

Eric Lawton, 40, surrendered. He has been charged with theft.

"The other subject fled from officers," said Hechlinski.

He drove more than 90 miles an hour through two counties.

"Officers were stopped by a train and that's where the other suspect was able to ditch his car I believe into a cornfield," said Hechlinski.

Rick Hamilton was called to retrieve the truck.

"It was tucked in pretty good," said Hamilton, of Hamilton's towing. "The tire was definitely flat when we got there."

Police believe the two were loading the truck with scrap metal to sell it for cash.

At the impound yard, there's a receipt in the front windshield of the towed vehicle that's dated July 28 at 9:37 where a delivery was made to Paul's Auto Yard in Elkhart for tin. Someone named Robert Nowicki was given $63 in cash.

There were other receipts for scrap metal inside the vehicle visible from the outside.

The prosecutor's office confirmed that Robert Nowicki is the second suspect in this case. He hasn't been formally charged.