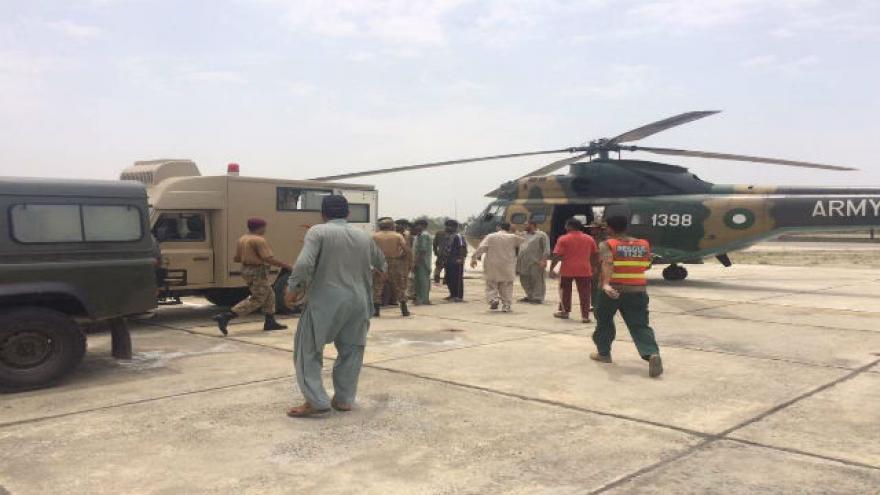 Smoke billowed from the truck that fell off the road Sunday when the driver lost control in the city of Bahawalpur, police official Mohammad Akhtar told CNN.

The explosion came as villagers began to gather around the truck in an attempt to collect oil in containers, Akhtar said.

The blast has left at least 130 people injured. A state of emergency has been declared in the city, Punjab provincial government spokesman Salman Sufi said.

Bahawalpur's Victoria Hospital said it was treating 40 of the injured, all of whom have suffered 70% burns.

Pakistan's Inter-Services Public Relations (ISPR), the media wing of Pakistan's military, said a total of 51 people with serious burns and in critical condition have been transported by army helicopters to the city of Multan.

It added that the road had been reopened and that traffic had started to flow again.

Chief Minister of Punjab Muhammad Shehbaz Sharif has said an inquiry would be held into the incident.

Imran Khan, chairman of the Pakistan Tehreek-e-Insaf party, tweeted that the blaze was "a national tragedy of epic proportions."

The politician and former cricketer said he had asked local leadership to assess what assistance could be provided to the injured and victims' families.

The US Embassy in Islamabad tweeted its condolences. "We are so saddened to hear of the terrible oil tanker accident in #Bahawalpur," it said. "Our deep condolences to the families and loved ones of the victims."

CNN's Sophia Saifi reported from Karachi, Susannah Cullinane wrote from Auckland and Adeel Raja contributed to this report from Islamabad.