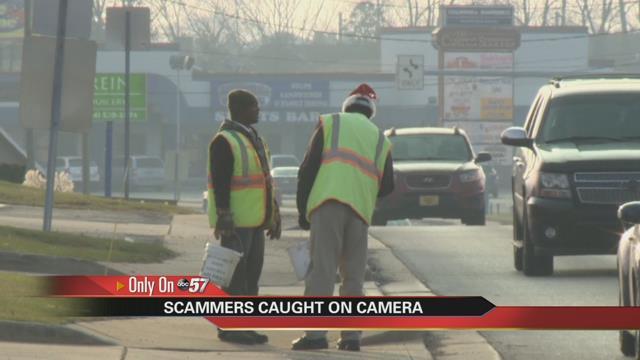 The group was carrying donation buckets that read “help needy children,” but never stated what charity they were with.

When we tried to question them on their motives, they took off.

“They didn’t really seem like they were all that charitable either,” said resident Allison Oler.

It was that suspicion that led our cameras to the corner of Ironwood and State Road 23.

On the corner were three festive folks looking for donations.

“On their bucket there was like a white paper sign with red writing on it,” said Oler.

Those signs were for a holiday donation drive.

“I didn’t respond to them because I was startled and then they yelled like super loud ‘have a nice day,’ over my music and everything,” said Oler.

But police think they weren’t actually looking to spread that holiday joy.

“If having cameras and questions startled them, and made them want to leave, it was probably wasn’t on the up and up anyway,” said Assistant Chief Bill Thompson, St. Joseph County Police.

Police say this same group had been caught pulling this holiday scam all around the county.

“It was inside the city of Mishawaka, as they approached my car, once they saw it was a police vehicle and an uniformed police officer inside they didn’t make any eye contact and didn’t make any attempt to contact me,” said Thompson.

The same thing happened in South Bend on Monday.

Instead of ignoring our cameras, they avoided us all together eventually jumping into a van.

And police say since there are no laws against panhandling, it’s up to residents to be careful where they give during this giving season.

“It’s a good idea to know what the organization is. If it’s not something you heard of, then there may be something wrong with it,” said Thompson.

Police say the only way they can intervene is if these groups pose a safety concern for residents.

You’re encourage to research charity groups before you donate to them. You can use websites like Charity Navigator or the BBB's Wise Giving Alliance to check out charities.

The Federal Trade Commission also has tips on charity scams.