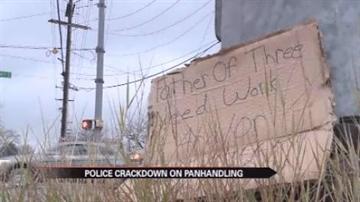 SOUTH BEND, Ind. -- This season is largely about giving but be careful who you stop on the street and give money to. Giving money to panhandlers may get you ticketed.

Panhandling has been illegal in South Bend for several years, police say they are cracking down on it around the holidays.

Sometimes it's a veteran in need, or a mother or father struggling to provide for their kids.

Police say no matter the reason, it's against the law.

These laws were put into place when police noticed a major increase in aggressive panhandling in the area.

Cpt. Phil Trent with the South Bend Police Department explained, "It was people that were panhandling so aggressively that it was becoming so intimidating that it blurred the line between a strong armed robbery and simply asking for money."

Even if you have good intentions, you are violating the law when you hold up traffic to pass money to someone on the sidewalk.

Some South Bend residents think the law is unfair.

"I feel like if you need money then there's a way to get it.  I don't see anything wrong with it," said Sean Stepp a Center for the Homeless resident. "But if they are using it for cigarettes or something then that's not good."

The police say that they are aware that need increases around this time of year. If you need help or would like to help others, do so through a local charity.