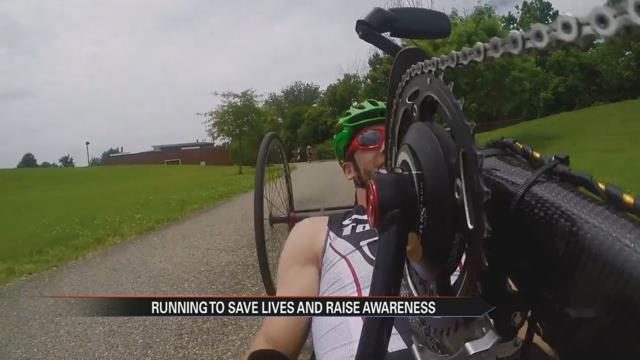 Two friends formed a life time friendship, racing together in Benton Harbor. Now they reunite under different circumstances, racing on the same team in a triathlon to help change lives.

Tom Morris is the current strength coach at Indiana University in Bloomington. Jason Dierking holds the same title at the University of Louisville.

The two developed a bond while racing together in Benton Harbor in 2010 in the Iron Man 70.3 Steelhead triathlon. They had planned to do so again. But things changed after Tom was injured in a mountain biking accident in 2012.  He was paralyzed as a result. But after going through rehab, he's made it a point to return to Benton Harbor and race again.

It will be Tom Morris' first time racing since the 2012 biking accident.  This time he's getting his wife, Christa, involved. She is joining him and Jason for Benton Harbor's Iron Man 70.3 Steelhead Triathlon. And now, claiming the title "Tom's Team," it's become more than just a recreational activity.

"Four years later things have gone to a new normal," said Tom Morris. "And it's allowed us to take this Toms Team, which helped us out before, and now turn it into a charity to pay it forward and help others."

The team says their goal is to give back to fellow athletes who have suffered spinal cord injuries. Tom will be using a hand cycle. And since the race is 70.3 miles long, they are trying to raise $70,300 dollars. That money would go to gym memberships and rehabilitation programs for spinal cord injury patients to keep them active and help them rebound like Tom did.

"We learned a lot from this," said Christa Morris.  "And hopefully now what we learned, we can kind of use that to help other people conquer some obstacles they might see from going through this."

The race is August 14 in Benton Harbor. The team is asking for community support. You can donate at their official site.