Parent speaks out about inedible food in schools 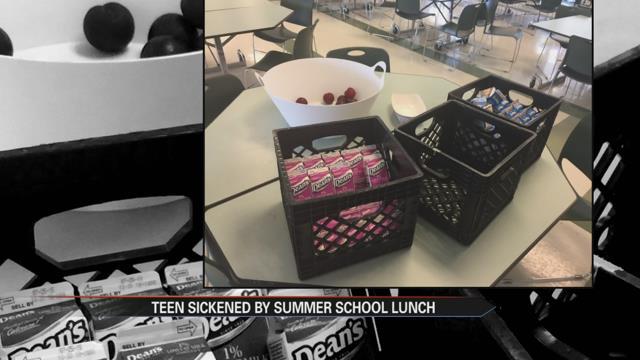 A local mother is speaking out after seeing what her daughter is being fed at Washington High’s Summer School Program in South Bend.

The family did not want to give us their last name or have their daughter's face shown on camera.

“She has been coming home with stomach aches telling me that they are getting served spoiled food," said Barbara, the girl's mother.

“Our applesauce, it was dated the 2nd but it was the 14th when we got it and I know the milk was four days old and smelled like oranges. Some of the meat we're getting is like frozen in the sandwiches in the buns are like hard," said Barbara's daughter.

Barbara says some of the food doesn't have dates.

“Packaged food that does not even have dates on it. Juices that don't have dates on it. Milk that is out of date and they are having the kids put the food back in the crates at the end of lunch if they don't use it which to me is cross contamination," said Barbara.

So we reached out to the South Bend Community School Corporation and told them about this complaint.

"The call from the station was the first information we were given," said Superintendent Dr. Carole Schmidt.

And Bill Sniadecki, from the South Bend School Board, said the summer school supervisor did not know about this issue either.

"There have been no complaints from parents or students about the situation," said Sniadecki.

But this student says employees at summer school are aware of this.

“It is hard for me to believe that we would be serving expiration dates to our kids. And then the other question is if it did happen why wasn't it reported to the school? Why was it just reported to ABC news.”

Barbara says she has reached out to the schools on other issues and is tired of not being heard.

“They don't care about the kids enough nowadays in the public school system to even pay attention to what's going on," said Barbara.