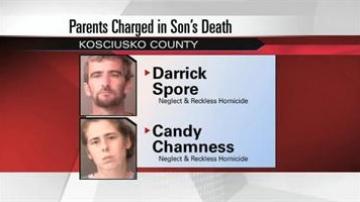 SYRACUSE, Ind. -- The parents of a 12-year-old who died of carbon monoxide poising have been charged in their son's death.  Darrick W. Spore, 34, and Candy S. Chamness, 34, have each been charged with one count of neglect of a dependent and one count of reckless homicide.

Syracuse Police and EMS arrived after someone called the Kosciusko County dispatch about a person not breathing.

The investigation revealed the boy had been deceased for several hours when he was found dead of carbon monoxide poisoning.

The electricity had been cut to the home the day before and Skyler's parents were using a generator in the basement and one on the porch to provide electricity to the home.

During the time Skyler's death happened, investigators say Darrick and Candy were under the influence of methamphetamine.