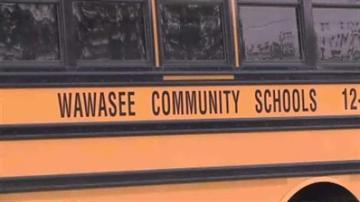 MILFORD, Ind.-- Parents in Milford say they don't want to be another small town on the news saying 'we didn't think it would happen here.' That's why a parent started circulating a petition around after-school baseball games to get a school resource officer.

Milford's a small town of about 1,500 people. Nearly a third of them walk the halls inside the school and concerned parents want to give the 638 kids more protection.

Ideally parents want an armed police officer, to not only provide security, but also be someone the students can trust.

"With the bullying and the suicides and everything that's been happening around lately it would be better having someone that they're comfortable knowing," said Pam McGreevy, mother of three.

The town council has been debating how to finance a full-time school resource officer, but town councilman Bob Cockburn says the money is there.

"We have an opportunity here for Milford that we have been fiscally responsible. I'm not saying we have too much money, but when we need the money we can find it," said Cockburn.

The full-time SRO would cost close to $50,000 with training and salary. For right now, the board has come up with a compromise that will only cost $20,000.

The plan is to rotate various officers they already have inside the school from fall until Christmas.

"It's better than nothing," said Cockburn. " It's gonna hit more the safety issue than the nurturing and prevention, counseling, tutoring things that could be going on."

A school resource officer is specifically trained to act as a counselor, confidant and help prevent school incidents-rather than just stop them.