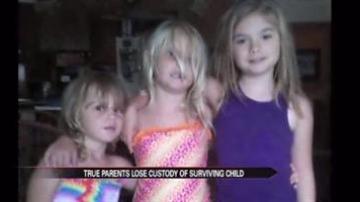 CASSOPOLIS, Mich. -- The parents who lost two of their daughters in a deadly car accident on M-60 and Leet Road in Howard Township have lost custody of their daughter who survived the accident.

A Cass County judge stripped Kirk True and Jennifer Baird of their parental rights to Penelope True on Thursday.

Penelope, 4, is recovering from injuries sustained in the September 2012 crash.

Her sisters, 9-year old Juliana Brown and 6-year-old Sophia True, were killed in the accident.

Long before the accident, Child Protective Services was looking into the True family. In 2006, an investigation was conducted after allegations of domestic violence between Kirk and Jennifer.

Penelope's recovery sparked a new investigation into the family.

During the investigation a doctor, identified as Dr. Rush at Mary Free Bed Rehabilitation, wrote "At the time of her discharge, Penelope will be in need of consistency, routine and external structure during the recovery of her brain injury."

The judge decided Wednesday that neither Jennifer nor Kirk isn’t up to the task.

The investigator found Jennifer has a long history of abusing prescription drugs. Once, the investigation found, Penelope climbed a counter and injested anti-depressent pills needed a stomach-pump.

Jennifer is also homeless, not looking for work and never showed up for two CPS mandated drug tests, according to reports.

Kirk, who didn't have custody at the time of the accident, admitted to not having a stable home or driver’s license and said he was out of town frequently for work.

The investigator concluded parental custody, “Presents a substantial risk of harm to the child’s life, physical health and/or mental well being.”

For now, Penelope is in state custody.

Kirk told ABC 57 News that as soon as he gets a new house and figures out things with work, he hopes to get full custody.

A. Jennifer's instability and drug use/involvement.

B. Jennifer's unhealthy relationships with different men and suspected ongoing DV (domestic violence) which was the reason for previous CPS case in 2006.

D. Kirk failed to address ongoing concerns through custody and allowed it to continue. He is also in the process of moving in with a new girlfriend and buying a new house which would not provide stability that Penelope needs.

E. Kirk is currently on probation for DUI in March of 2012 and has no driver's license.

F. Penelope's medical needs are going to require a very dedicated, reliable and stable caretaker that can provide a stable environment. Upon discharge neither parent is in the position to do so at this time.