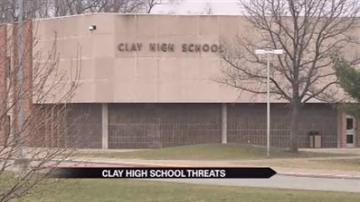 ST. JOSEPH COUNTY, Ind. -- Friday's school shooting in Connecticut put parents across the country on edge. Now parents of students at Clay High School are even more concerned after threats that something bad could happen began circulating this week.

Threats like these are made several times a year, every year at schools all over the country. Many are made on days close to a vacation or break.

Following that fight, rumors of a retaliatory act set for Friday have been circulating.

It has school officials, police, and parents on high alert.

"Anytime we do receive these types of threats, or get wind of them, we're going to take as many steps as we possibly can to ensure the safety of the students, do everything we can within our powers to help out,” said Lieutenant Matt Blank of the St. Joseph County Police Department.

Parents took to social media sites to spread their concern.

One parent wrote: "I hope that it is just a rumor" while another wrote, "I pray this is a hoax."

But police aren't relying on hopes and prayers.

"There will also be an increased presence within the school during the school day; several additional officers will be present throughout the day,” said Blank.

Having a police officer at the school is nothing new in St. Joseph County.

"There is an officer that is assigned there full time while the students are in session. That is his purpose to be there every day all day,” said Blank.

While no one can say for certain if their presence has prevented a catastrophe, the officers have developed relationships with students that may have helped deter incidents before they happened.

"A lot of the students feel comfortable talking to them, especially when they have concerns about their own safety or that something bad could possibly happen at the school,” said Blank.

As for Friday, Blank says parents of Clay High School students have to make their own decision about pulling their kids out of school.

"For us to say, or downplay it in any way shape or form, would be doing a disservice to the community. The flip side of that is, we're not going to try and build it up into something that it's not, either,” said Blank.

Because of this threat, the school district is going to excuse all absences on Friday for parents who want to keep their kids home.