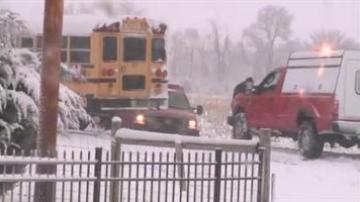 ST. JOSEPH COUNTY, Ind. -- A Penn Harris Madison school bus slid off the road and into a ditch Wednesday morning. Many parents were left wondering why the district didn't cancel school.

Some parents said they thought the only reason Penn-Harris-Madison didn't cancel was because of the ISTEP.

"I just assumed it was going to be a delay or shutdown because of the roads and the conditions," said parent Ricky Anderson.

Parents were shocked to find out that despite the weather, their kids were expected to be in class.

"I was surprised," said Anderson.

Ashley Yoder said she tried to listen to her gut.

"I made the decision with them this morning, they're not going," said Yoder.

But her daughter had ISTEP.

"She was upset, she was visibly upset, 'I'm going to be in trouble if I don't go take this test! I have to be there,'" said Yoder.

After the bus ended up in a ditch, Penn Harris Madison Schools refused to do any interviews, but they did release this statement.

The decision to hold school today was totally unrelated to ISTEP. We begin checking roads and weather conditions around 4 a.m. and the heavy snow did not start until later when our buses were underway.

On Tuesday, the assistant superintendent sat down with ABC57 and emphasized how important the tests are.

"Our children, our schools, our teachers are all assessed on this kind of testing and so we want to make sure that we have the optimal potential going for everyone," said Kay Antonelli, Assistant Superintendent for Instruction at Penn Harris Madison Schools.