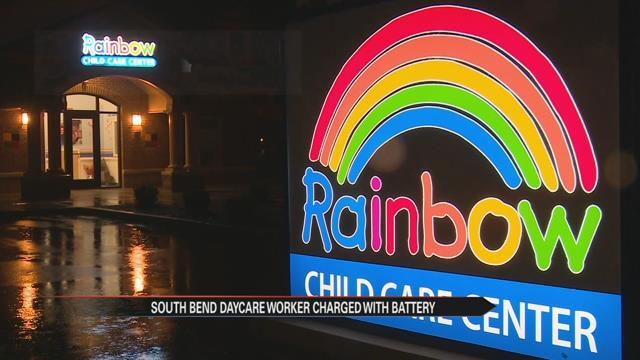 An employee at Rainbow Child Care Center in South Bend was accused of breaking a baby’s arm. In the wake of the charges, parents are speaking out in support of the daycare.

It’s every parent’s worst nightmare—their child hurt at a place that’s supposed to be a ‘home away from home.’

“It’s just a shame that it happened at Rainbow. It could have happened anywhere,” said Lily Antsaklis, who has been taking her daughter to Rainbow since it opened in January.

According to the Probable Cause Affidavit, Jester says she heard a pop when holding the baby, but she didn’t report it. The child’s parents later discovered he had a broken arm.

Also in the PCA, the child’s doctor said that a significant amount of force would have been needed to make that fracture.

“It was a little alarming,” said Antsaklis.

But, she thinks the daycare is handling the situation well.

“The way the daycare has handled it. I’m extremely impressed. I don’t think there’s anything else they could have done differently to ease my nerves,” said Antsaklis.

“They told us everything they could and that they were going to keep us involved in communication and keep us up to speed in everything that was going on,” said Antsaklis.

And she feels comfortable keeping her child at Rainbow.

“I have no doubts that they’ll continue to care for my child as they have been,” said Antsaklis.

Many other parents have echoed Lily’s support on Facebook.

In regards to the case against Jester, the prosecution is basing some of its allegations on video surveillance from within the daycare.

Lily said those extra eyes are part of why she chose Rainbow Daycare in the first place.

Because the investigation is ongoing, we don’t have access to that video at this time.