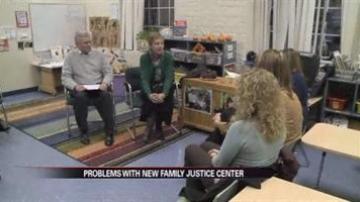 SOUTH BEND, Ind -- Twenty-eight feet is all that separates children of a local day care with a newly proposed Family Justice Center.

"It's going to be challenging to nail them down on what they're going to do moving forward."

Amy Wodarek-O'Reilly has concerns; like any parent would with a child in day care.

"Any time you're away from your child, you're worried about them," Wodarek-O'Reilly said.

Her son is enrolled at the East Bank Learning Center close to downtown South Bend.

It's only a stone's throw away from the new neighbors next door.

Twenty-eight feet is all that separates children of the day care with a newly proposed Family Justice Center.

Police may bring people suspected of violent acts or sex crimes to the center to interview them.

The close distance between the two has some parents upset.

"The perception is it's unsafe, and as we all know, perception becomes reality for individuals," Jim Benek, a concerned parent, said.

The county's Special Victims Unit along with several other police agencies have plans on moving in next door to the day care in mid-December.

Some parents, however; found the discussion to be one-sided.

"I felt like I was talking to a politician tonight," Wodarek-O'Reilly said.

Leaving many undecided on how to solve this problem.