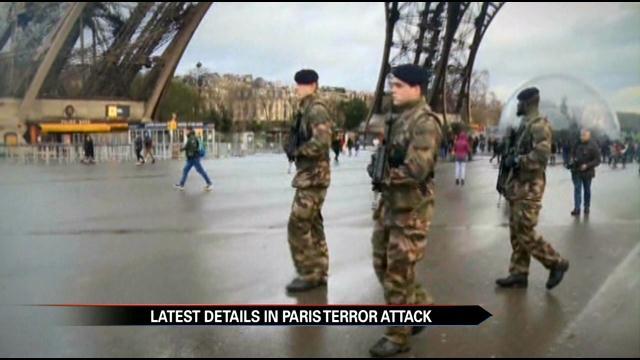 French authorities have arrested a person in Paris, believed to be connected to the crime.

Police say they think the accused terrorists who were killed had accomplices because of their extensive weaponry and logistics.

29-year-old Fritz-Joly Joachin was tracked down and arrested in Bulgaria, and is believed to be linked to the brothers who carried out the massacre at Charlie Hebdo last week.

Police are still trying to find 26-year-old Hayat Boumeddiene, the alleged girlfriend of the gunman who killed four people at a Kosher supermarket.

Investigators believe she and an accomplice are now hiding in ISIS territory in Syria.

“It's gonna be difficult even to conduct surveillance of her activities while she's in Syria,” says Matt Olsen of the National Counterterrorism Center.

Following those deadly attacks in France which Al-Qaeda in Yemen boldly claims it orchestrates, a new threat was aimed at US airports.

Al-Qaeda's magazine “Inspire” published step-by-step instruction on how to make a new type of bomb that would only be detected by full body scanner machines, which many small airports don't have.

“AQAP is absolutely determined to try to take out an attack on a US bound airplane,” says Olsen.

On Tuesday, the two French police officers shot to death in the Charlie Hebdo attacks were honored, and the four hostages killed at the supermarket were laid to rest.

As for employees at Charlie Hebdo Magazine, they refused to give in to their sadness or fear and released this week's issue, distributing a record two million copies.

A cartoon of the prophet Muhammad is seen on the cover, holding a sign with “Je Suis Charlie” written on it.