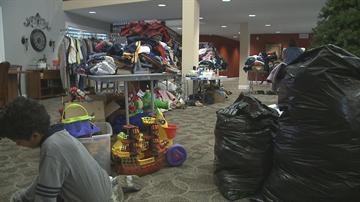 South Bend, Ind. – Tables full of clothes stood atop rows of shoes inside the club house at Park Jefferson Apartments on Saturday. Volunteers sorted through all the items, but it was difficult to keep up as more and more garbage bags full of donations piled in.

“Clothes, all the food, and there are toys over there,”11-year-old Caleb Cleveland said as he wandered through club house full of donations.

Cleveland, his brother were all there for most of the morning and into the afternoon, “Looking through all of the stuff because our house burned down,” the boy said.

The Cleveland family lost everything in a large fire at Park Jefferson Apartments early Friday morning.

The flames quickly tore through most of the building; thirty-two of the forty apartments were destroyed.

“They was rushing me so I couldn’t get all of my stuff,” Cleveland said he ran out with just the clothes on his back, his pajamas.

Toplin does not live in the apartment complex and she doesn’t know anyone who does, but still she gathered up what she could to make a donation.

“Little things, anything it helps out and it counts and it matters,” Toplin said.

It was the little things Cleveland said he missed most, “socks, pants, a toothbrush.” The 11-year-old said he went picked out things that reminded him of the stuff he used to own.

He found white pants and a grey shirt, right now it’s the only outfit he has. “Well I got these earlier and when we got home I tried them on,” Cleveland said.

Toplin said she hopes her donations help people rebuild their lives and give them a fresh start, “Change is good and it’s always a great beginning for everyone who lost everything.”

Cleveland said he is sad and he misses his stuff, but the donations help, at least now he has something.

"Getting new stuff is always fun, like toys and playing with them, and wearing new clothes," said Cleveland.