Pastor reacts to shooting and home robbery near Elkhart church 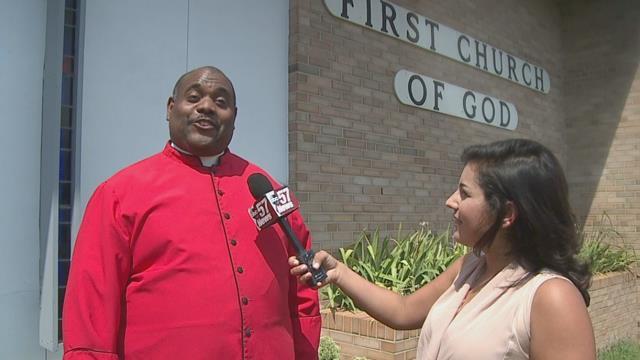 Just after 1:30 Sunday morning, Elkhart Police responded to a burglary and shooting at a home on Hiawatha Drive.

Police say three suspects shot and injured a man inside the home and tied up a woman and ransacked the home.

According to police, the suspects were dressed in black with their faces covered. They carried handguns and approached the female victim when she was entering the home.

As they forced their way into the residence, the man came towards the door and was shot in the neck.

The man was taken to Elkhart Memorial Hospital.

Police say the female victim was tied up during the robbery but was not injured.

When police arrived, the suspects had already fled the area.

“It’s awful strange that somebody would come by and rob the young man right here by the church,” Pastor Timothy T. Mack, First Church of God.

Pastor Mack preaches at the First Church of God directly across the street from the scene of Sunday’s shooting.

He says the area had previously avoided much of Elkhart’s crime.

The suspects’ target was just as surprising as the location to Pastor Mack.

“He’s a nice young man. Never known him to be in trouble,” said Pastor Mack.

The victim has even been known to support the church community.

Pastor Mack says the victim has purchased dinners and car washes to help out the church during fundraisers.

“We don’t know him to be in any kind of trouble so we don’t know why someone would rob this young man,” said Pastor Mack.

It wasn’t just the word of god that was heard at service this morning, word of this crime spread quickly between the parishioners.

Pastor Mack says there was one common emotion.

“Fear. Some people in the church said this is the first time this happened but they want to move away from over here now.”