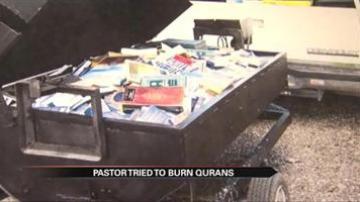 Florida police arrested a pastor right before he could set thousands of fuel-soaked Qurans on fire.

Police pulled over Pastor Terry Jones' pickup truck that was packed with thousands of Qurans covered in kerosene.

The sheriff compares the barbecue grill filled with the holy books to a bomb waiting to go off.

"He was potentially driving a bomb down the road had there been a crash," said Sheriff Grady Judd.

The 3,000 Qurans were seized as evidence.