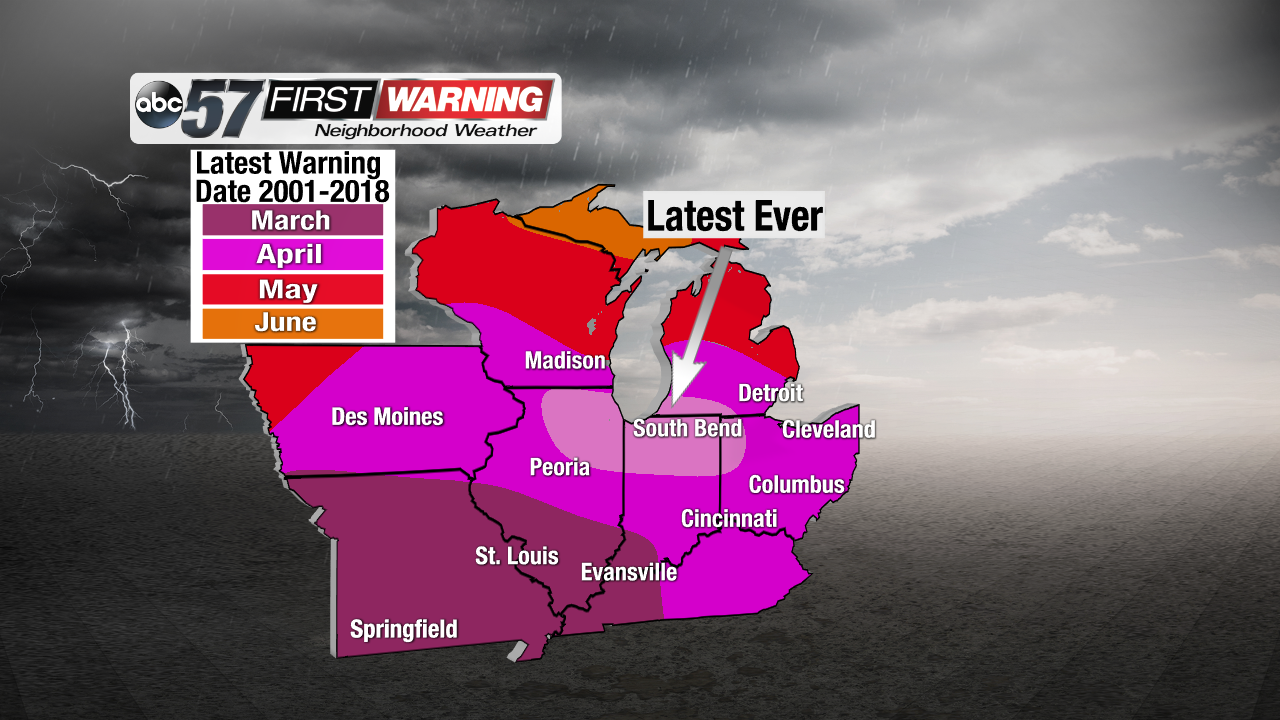 Latest first day for either a Severe Thunderstorm or Tornado Warning to be issued from 2001-2018.
If you've been wondering where our springtime thunderstorms have been this year, you're probably not alone. That's because it has been a very unusual year for many states in the middle of the country. There haven't been many thunderstorm or severe weather events from Oklahoma and Kansas to Iowa, Illinois, Indiana, and Michigan. In fact, Oklahoma has yet to see a tornado in 2018. By the end of the day on Friday, April 26th, the record for the latest first tornado in Oklahoma will belong to 2018. The reason? Plenty of below-normal and stable air across the Plains, Midwest and Great Lakes. The pattern has simply not supported severe weather this year. 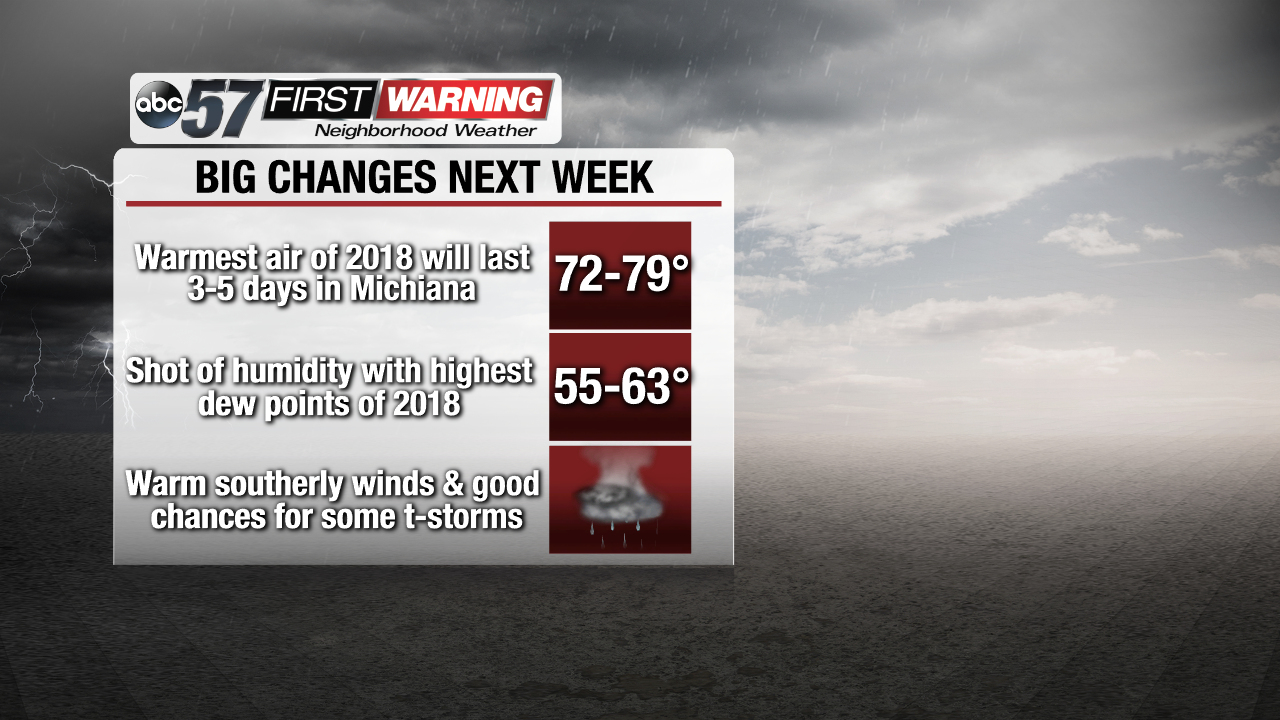 For northern Indiana and southwest Lower Michigan, this is the latest in a year that we have gone without a single Severe Thunderstorm Warning or Tornado Warning dating back to 2001! Neither the National Weather Service in Chicago, nor the National Weather Service in North Webster has issued either type of warning in 2018. That's truly remarkable. However, our severe weather season doesn't peak until May, June and July, which means we have plenty of time to see an uptick in severe weather events. And, while it is still several days out, thunderstorm chances look to ramp up next week; not only for us here in Michiana, but for states like Texas, Oklahoma, Kansas, Nebraska, Iowa, Illinois, Missouri, Arkansas, and Louisiana.

For the first time this year, warmer temperatures will move in and last for more than one or two days. There could be 3-5 days in a row in which temperatures exceed 70° beginning Monday. Not only that, but moisture will surge in from the Gulf of Mexico in the form of dew points in the middle 50s to lower 60s. What does that mean for us? It'll actually feel a little humid for the first time in several months. 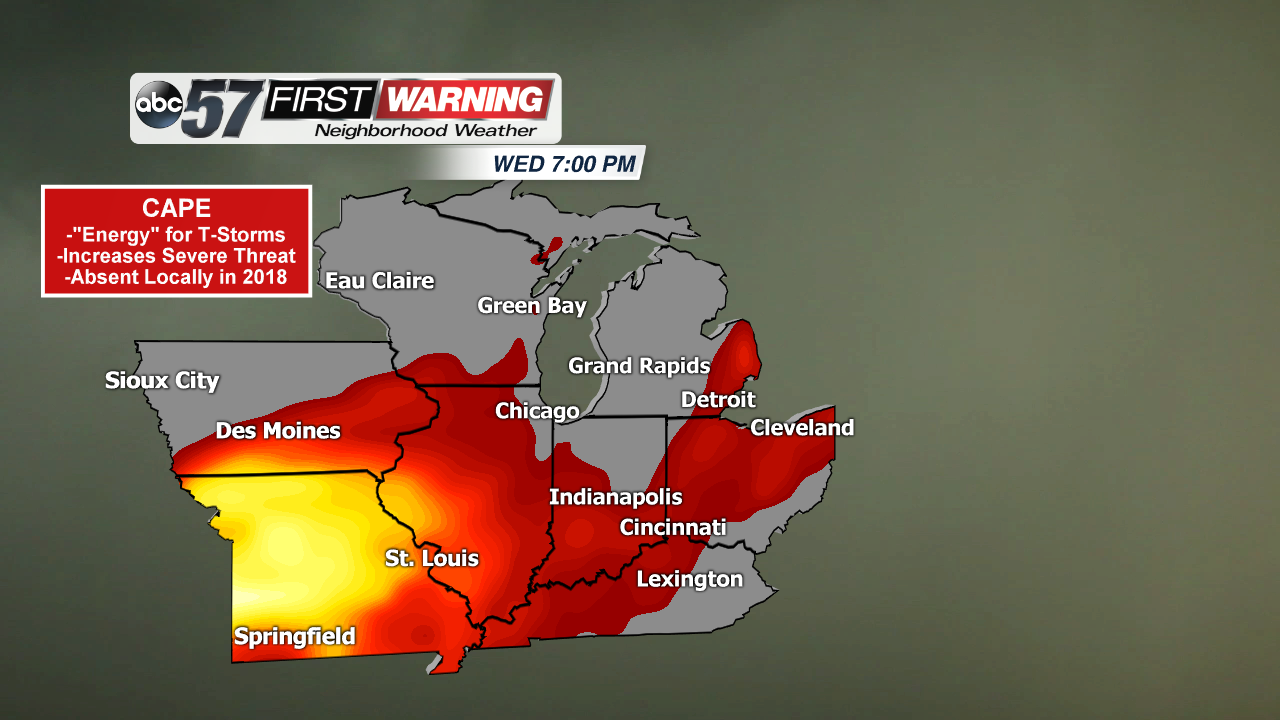 Combine the warmth and higher dew point temperatures with a cold front by the end of the week and you have a recipe for thunderstorms across a large area. While the highest coverage of thunderstorms and possibly severe weather will remain just to our west and southwest, the pattern looks favorable for some scattered thunderstorms locally. As it looks now, this is probably our best chance at thunderstorm activity thus far this year -- by far. A variable that meteorologists often look at to forecast whether or not thunderstorms and severe weather are expected is called Convective Available Potential Energy.
Share this article: