Paula Broadwell speaks out about affair 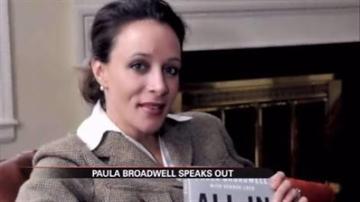 For the first time the woman who brought down the head of the CIA is speaking out.

In an exclusive interview Paula Broadwell spoke about her affair with former CIA director David Petraeus.

Broadwell was the biographer who became the mistress of one of the military's most respected men.

Broadwell says she is filled with shame and guilt over the affair and hopes her work with veterans will somehow redeem her.

"I'm the first to admit I've made mistakes and I'm regretful for the pain I've caused but at some point again you pick yourself up, face forward and keep moving," said Broadwell. "I'm blessed with family, community. That's been a great part of my rehabilitation if you will and wonderful."

The pair met while Broadwell was a graduate student at Harvard.

She was working on a dissertation about the general when he agreed to help her.