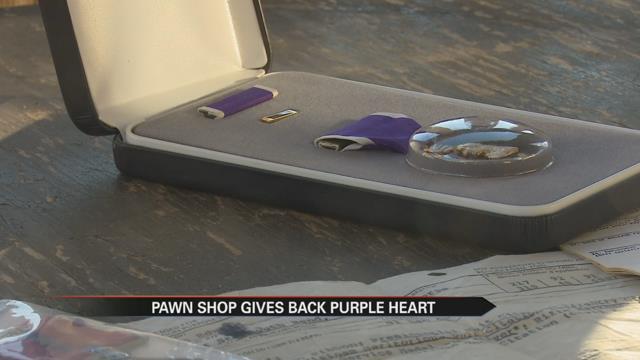 Three years ago, a Vietnam vet left a special heart at Worldwide Pawn, but managers couldn’t bring themselves to sell a medal that took sacrifice to earn.

“I think what you wanted to really see was that…I got this during my second tour of Vietnam…We get this for shedding our blood on foreign soil,” said one Vietnam veteran who received a purple heart, John Le’Noir.

But Vietnam veteran John Le’Noir pawned off his purple heart and other medals three years ago for $50-$60.

“We had had it for a while in our inventory, and we had been keeping a hold of it to see if he was going to come back for it. We then went ahead and got his number and tracked him down,” said Worldwide Pawn Assistant Manager, Crystal Bair.

“They called me and told me to come get them at no charge,” said Le’Noir.

“He said no way. He did not believe me at first,” said Bair.

“I was going to leave them there, and I thought it was a good gesture on their part,” said John.

“I personally come from a background of military, so I know how important it is and we wanted to give it back to its rightful owner. Someone who actually earned the item itself,” said Bair.

But John Le’Noir said the medals mean nothing compared to the friends he lost overseas.

“This don’t bring not one life. This don’t get my flesh and blood back from Vietnam,” he said.

It does, however, help his family remember and honor his service.

“Makes me proud as a son to know that my dad went out there and he was out there fighting the bad guys as they say…and he won,” said Le’Noir’s son.

And Worldwide Pawn has now won a place in their hearts.

“Just nice people and didn’t see it coming and just thank them. We thank them,” said Terrence.