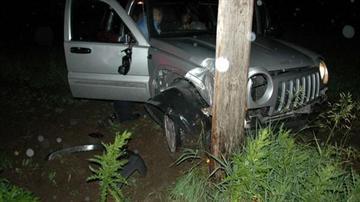 WARSAW, Ind. -- A Warsaw man died Wednesday afternoon just a few hours after he was struck by a Jeep Liberty near N. 150 West near W. 300 North in Kosciusko County.

The driver of the Jeep Liberty told Kosciusko County Sheriff's deputies he was driving southbound on CR 150 West when he accidentally struck a pedestrian.

The driver said he didn't see the pedestrian because he was wearing mostly dark clothing.

The accident happened around 5:20 a.m.

After he struck the pedestrian, the driver of the Jeep went off the road and struck a utility pole.

The pedestrian, 22-year-old Michael Keener, was flown to Lutheran Hospital in critical condition.