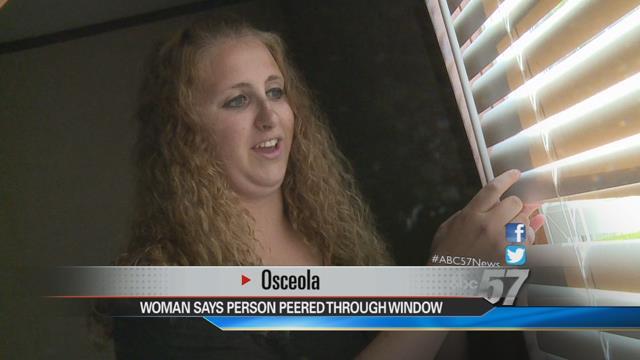 A Peeping Tom in the Cobus Green neighborhood has one young mother on edge.

Brittany Decker, a young mother in Osceola, says she woke up from a deep sleep to find a hooded figure staring back at her through her bedroom window while her 11-month-old son was sleeping just feet away.

Decker says when Elkhart County Sheriff’s Department came to investigate; they told her she wasn’t their first call that night in the same neighborhood.

“They acted like it wasn’t out of the norm,” says Decker.

Decker’s neighbors said this isn’t the first time something like that has happened in their area.

Decker has lived in Cobus Green for about 7 months and this is now the second time she says she’s been woken up by someone trying to break into her home.

She has since installed ADT security in her home and she is careful to double and triple check the locks on her doors and windows.

Captain Jim Bradbury with the Elkhart County Sheriff’s Department says this is something his officers are seriously investigating due to the numerous calls of the same nature from that neighborhood.

If you have any information, contact the Elkhart County Sheriff’s Department at 574-891-2100.