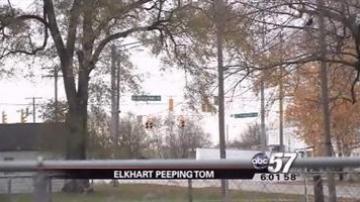 ELKHART Ind. -- All eyes are out for a peeper.  An 18-year-old girl says she saw a man peering in her window of County Road 20 on Sunday night.  The man they are looking for could be charged with voyeruism.  The 18-year-old victim was so frightened that she would not go on camera.  But one neighbor did talk to us and she says this isn't the first time this has happened.

"There are a lot of people around here that have had window peepers," said unidentified neighbor.

The woman only agreed to be interviewed if we did not show her face.  She says she is mad and scared for the kids in the neighborhood.

"It is frightening.  It really is.  Thare are kids of all ages in this neighborhood," said neighbor.

She thinks they need more cops patrolling the area, but she also thinks her neighbors may be part of the problem.  She fears some have not been reporting the peeper.

"Nobody really reports it even though they should just to be on the safe side, so no harm comes to their kids," said neighbor.

She is worried the problem could escalate if it is not stopped.

"You never know when somebody is going to take the next step from a window peeper to a rapist or child molester," said neighbor.