Pelosi says House is drafting articles of impeachment against Trump 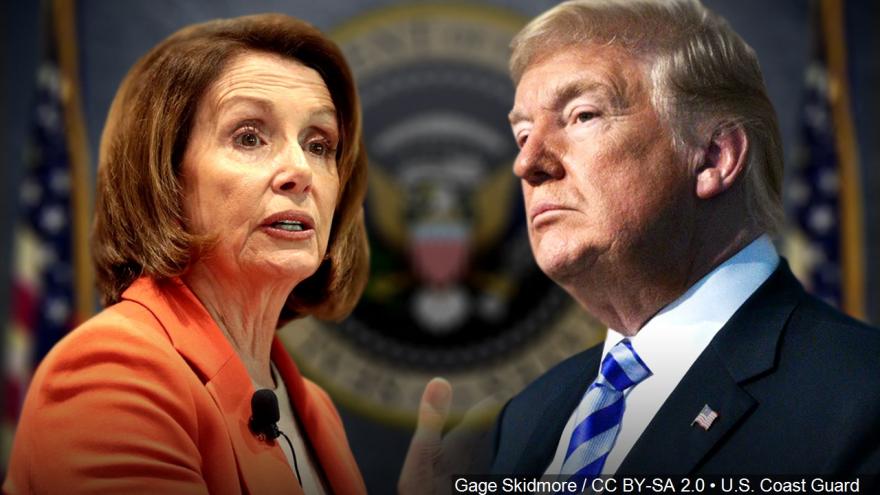 (CNN) -- House Speaker Nancy Pelosi said Thursday the House was proceeding with articles of impeachment against President Donald Trump, a historic step that is likely to make Trump the third President in US history to be impeached.

"Today, I am asking our chairmen to proceed with articles of impeachment," Pelosi said in a brief address outside her office, the same location where she announced Democrats would open the impeachment inquiry two months ago. "The President leaves us no choice but to act because he is trying to corrupt once again the election for his own benefit."

The speaker's announcement is the clearest signal yet that Democrats are moving swiftly to impeach the President before Christmas.

Pelosi's direction to House Judiciary Chairman Jerry Nadler and other committee chairs to draft articles of impeachment comes one day after the Judiciary Committee held its first impeachment hearing, where legal experts testified on about whether Trump's conduct was impeachable.

Pelosi argued that the case against Trump is clear.

"The facts are uncontested. The President abused his power for his own personal political benefit at the expense of our national security by withholding military aid and a crucial Oval Office meeting in exchange for an announcement of an investigation into his political rival," she said.

"If we allow a President to be above the law, we do so surely at the peril of our republic," Pelosi continued, adding, "In America, no one is above the law."

Trump tweeted ahead of Pelosi's announcement Thursday that the Democrats should quickly impeach him so they could move onto the Senate trial, where Republicans have a majority.

"They have no Impeachment case and are demeaning our Country," Trump said. "But nothing matters to them, they have gone crazy. Therefore I say, if you are going to impeach me, do it now, fast, so we can have a fair...trial in the Senate, and so that our Country can get back to business."

As the Judiciary Committee prepares to bring forward articles of impeachment, the panel's next step is expected to be a look into the evidence presented by the House Intelligence Committee, which released on Tuesday a 300-page report detailing the findings of the House's two-month investigation into Trump and Ukraine. The Judiciary Committee could consider and approve articles by the end of next week.

Pelosi plans to continue meeting with her members and getting their input on articles of impeachment, in an effort to also help her understand where the votes are, according to Democratic sources.

Democrats are considering bringing multiple articles of impeachment against the President, including abuse of power and bribery for his actions toward Ukraine, and obstruction of Congress for stonewalling the investigation. Democrats are also weighing whether to bring forward an obstruction of justice charge that would include the allegations against Trump detailed in former special counsel Robert Mueller's investigation.

Rep. Hakeem Jeffries of New York, a member of House Democratic leadership, said Thursday it "remains to be seen" if Mueller-related charges will be included in the articles of impeachment.

But many House Democrats in Trump-leaning districts are weary about impeachment including the Mueller allegations, as there was a bloc of Democrats who only backed the impeachment inquiry when it became narrowly focused on the President's dealings with Ukraine.

While the Judiciary Committee will be tasked with drafting and considering the articles of impeachment, the ultimate decision about what to include is expected to come down to a small group, which includes the speaker, Nadler and House Intelligence Chairman Adam Schiff of California. And it will be a closely held secret until it is unveiled.

Republicans have continued to slam the impeachment process as an unfair process that's predetermined to try to overturn the results of the 2016 election, and their attacks on the Democrats will only ratchet up as an impeachment vote gets closer to reality.

"Speaker Pelosi just unilaterally decided to proceed with articles of impeachment. Even after yesterday's disastrous hearing," tweeted House Minority Whip Steve Scalise of Louisiana. "She proved what we already knew: She doesn't care about facts or truth. Dems have no case. She's rushing because she knows she's lost public support."

Trump's tweets Thursday included a call for Republicans in the Senate to call witnesses that Democrats have not allowed in the House, including Schiff, former Vice President Joe Biden and his son Hunter Biden — and even Pelosi.

"We will have Schiff, the Bidens, Pelosi and many more testify, and will reveal, for the first time, how corrupt our system really is. I was elected to 'Clean the Swamp,' and that's what I am doing!" he said.