Pence says US will honor refugee deal with Australia 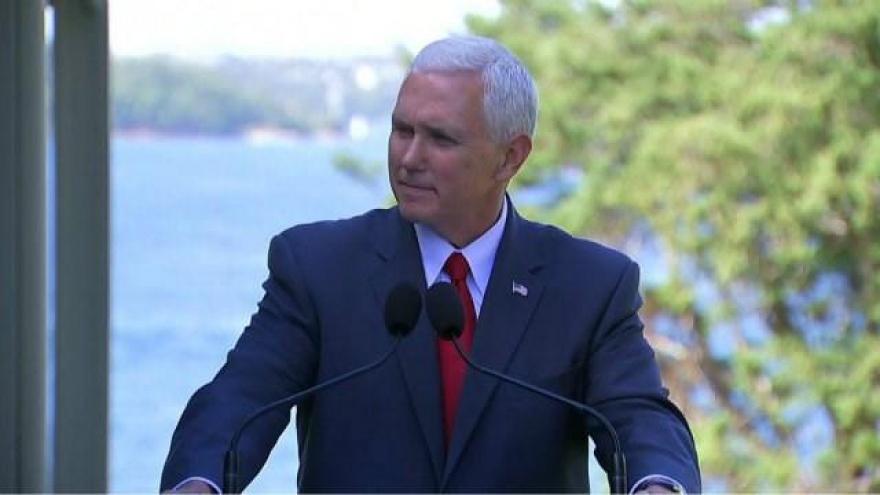 (CNN) -- US Vice President Mike Pence said Saturday that the United States would "honor" a refugee resettlement agreement forged with Australia in the closing days of the Obama administration, despite it previously being described by US President Donald Trump as a "dumb deal."

Pence made the commitment -- subject to the refugees passing stringent US vetting procedures -- at a joint news conference in Sydney with Australian Prime Minister Malcolm Turnbull, with whom Trump reportedly had a testy first call because of the refugee issue.

Under the arrangement, agreed by former US President Barack Obama and Turnbull in November within days of Trump's election, Australia would transfer up to 1,250 refugees currently held in offshore detention centers on the Pacific Island nation of Nauru and Papua New Guinea's Manus Island to the United States. Many are from Iran.

In return, Australia would resettle refugees from Guatemala, Honduras and El Salvador, according to Reuters news agency, as part of a US-led program in Central America.

"Let me make it clear that the United States intends to honor the agreement, subject to the result of the vetting process that has now applied to all refugees considered for admission to the United States of America," said Pence, who is in Australia as part of a 10-day Asia-Pacific tour.

"President Trump has made it clear that we'll honor the agreement, but it doesn't mean we admire the agreement," he added. "Frankly looking back at the last administration, the President has never been shy about expressing frustration with other international agreements, most notably the so-called nuclear agreement with Iran."

Pence said the decision to abide by the deal despite Trump's "reservations" was a "reflection of the enormous importance of the historical alliance between the United States and Australia."

Turnbull voiced his thanks, saying "the commitment to honor the deal is very important and one that speaks volumes."

In a tweet posted February 2, Trump made his feelings about the agreement quite clear, saying: "Do you believe it? The Obama Administration agreed to take thousands of illegal immigrants from Australia. Why? I will study this dumb deal!"

Trump's frustration over the agreement and reports of his contentious first call with Turnbull led to concern that America's longstanding alliance with Australia, an important regional ally, might be dented.

But a White House foreign policy adviser played down any tensions ahead of Pence's arrival, saying the two allies would reaffirm their partnership on security, trade and immigration issues during the visit.

Pence has also visited Japan, South Korea and Indonesia on a trip aimed at shoring up alliances in the Asia-Pacific region at a time of heightened tensions with North Korea.