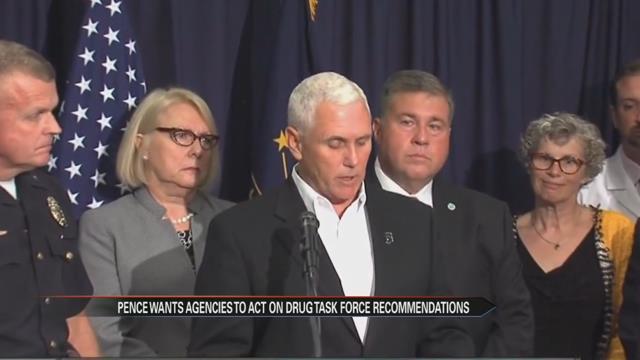 For the last several months, Governor Mike Pence has been adamant about curbing Indiana’s drug problem and with the guidance of the anti-drug task force he launched in September the Governor took major steps Tuesday to address the state’s epidemic.

A list of items was accepted for recommendation to the Governor at that meeting and Tuesday, Governor Pence took it a step further.

Among the multiple state agencies Governor Pence called to act on his task force’s recommendations, as the professional licensing agency.

Governor Pence directed the agency to look for ways to increase access to INSPECT for prescribers and dispensers.

INSPECT is a report that compiles controlled substance information into an online database, giving health care professionals a clearer version of patient information.

The governor also called for supporting legislation that would enable pharmacies and other entities to sell an overdose intervention drug like naloxone without needing a prior prescription from a physician.

The Governor’s Task Force will hold their next meeting on December 8th.

They will meet at Community Hospital North in Indianapolis.