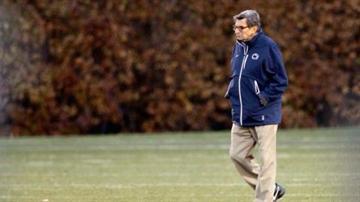 STATE COLLEGE, Pa. -- Penn State University's Nittany Lions played their first football game in 46 years without legendary head coach, Joe Paterno, 84, who was fired amid a sexual abuse scandal that rocked the campus this past week.

After an emotional pre-game prayer involving all the players and coaches from both Penn State and visiting Big Ten rival Nebraska, the Nittany Lions fell behind 17-0 in the third quarter, and their comeback fell short, losing 17-14.

The moment of silence was held for the victims of alleged child sexual abuse at the hands of a former defensive coordinator Jerry Sandusky, a scandal that led the board of trustees to fire Paterno along with the university president and other school officials.

At a news conference after the game, newly appointed Penn State President Rodney Erickson -- who replaced former president Graham Spanier, who also was fired -- said he believed it was right to play and bring national attention to issue of sexual abuse.

He said the pre-game moment of silence "one of the most moving and genuine" shows of support he's seen.

Despite the turmoil in the football program, Erickson said that if Penn State -- which was ranked No. 12 coming in to the game -- receives a bowl bid, the school would not turn it down.

"If our student athletes have earned the right to compete" in a bowl, "I see no reason not to do so," he said,

Sandusky has been charged with sexually assaulting eight boys over a 15-year period. Two other university officials are facing perjury charges related to the case.

The mother of the first child to contact police alleges that her son was about 11, and enrolled in programs sponsored by Sandusky's Second Mile Foundation, when the molestation began.

She sought intervention from her son's guidance counselors, who confirmed her suspicions that he had been molested by Sandusky who, she said, also was regularly taking the boy away from school grounds during the schoolday, without her knowledge or consent. Her son spent time alone with Sandusky, she said, and slept overnight in his basement.

"I was horrified," the mother said, of what she learned from school counselors.

Increased security was in place for today's game against Nebraska and "inspections will be more deliberate and thorough, and the University's regulation on bags will be strictly enforced," university officials said.

Police and FBI investigated and did not find anything. "They searched the area again this morning, and again found nothing," officials said in a statement posted on Penn State's website.

Right before the game kicked off today, it was an emotional moment at Beaver Stadium as Penn State and Nebraska players and staff walked to the center of the field and kneeled in silence for several moments in prayer.

Nebraska won the coin toss but deferred its choice to kick or receive to Penn State.

Penn State, a longtime sports powerhouse, has much more on the line than football.

While riotous student protesters, angered by what they view as the scapegoating of Paterno, overturned one TV crew's vehicle this week and gathered en masse in front of Paterno's home, other students have placed their focus elsewhere.