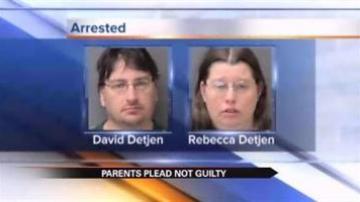 HENRY COUNTY, Ind. -- The parents of five children found in the back of an unheated box truck have pleaded not guilty to neglect charges.

David and Rebecca Detjen appeared in court in Henry County, Indiana on Friday.

Both parents face one felony neglect count each.

The family rented the moving truck in Pennslyvania and was headed to California.

The parents were arrested in Indiana on Thursday after someone called in a tip about the kids in the back of the truck.

Court records show the couple was once arrested in 2005 for endangering the welfare of a child.

The trial date is set for March 11.