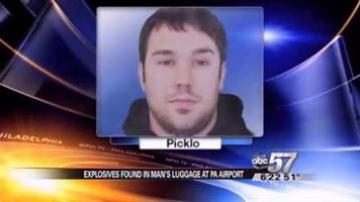 PHILADELPHIA -- A Pennsylvania man is in police custody after TSA agents found explosive materials in his luggage.

It happened just after 5:30 a.m. at Philadelphia International Airport.

29-year-old Joseph Picklo was detained at a security checkpoint.

Police said Picklo told them that he forgot the items were in his bag.

"He says he has an interest in these items professionally and that he experiments with items and that he forgot they were in his luggage," said Chief Inspector Joe Sullivan with the Philadelphia Police Department.