Penny Man to receive one millionth penny for charity 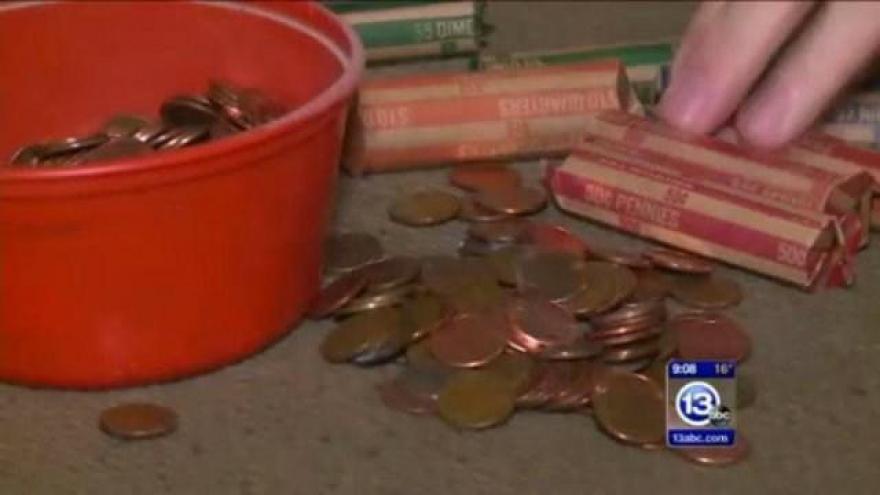 This morning, one man is set to collect his one millionth penny.

He will then donate it, along with all of the others, to the same charity that has benefited from the coins for nearly three decades, Heifer International.

"When I go to each class, kids get real excited and then they yell out, 'Hey! The Penny Man!' So, that's how I got my name," explains Agler.

In 1989, Agler says the wife of the pastor started a penny drive to raise money for Heifer International.

The charity buys livestock for villages in third-world countries.

"Well, the first year, we had 27,000, which we had in a wheelbarrow. And at the end of the year, the last day of Sunday school, we had all the kids around and took a picture of it," recalls Agler. "And we had to decide how to get it to the bank and the bank didn't want to take them like that all at once, so they gave me money bags and then I learned from then to collect them every week and wrap them up, take it to the bank."

Today, before the church service at 10:30AM, Agler will accept the one millionth penny.

"I can't believe it," says Jenny Gaffius, Church Secretary at Rossford United Methodist. "It seems like it's taken a long time to get to a million pennies, but it's a lot of pennies, if you look at it in terms of weight and the amount of time that he's spent, spending collecting them and counting them every week. It's tedious work, but he's done really well."

Every time the back account gets to $1,000, Agler writes a check to Heiffer International.

After today, he will be able to write out the 10th check, bringing the total amount of pennies donated over the years to $10,000.