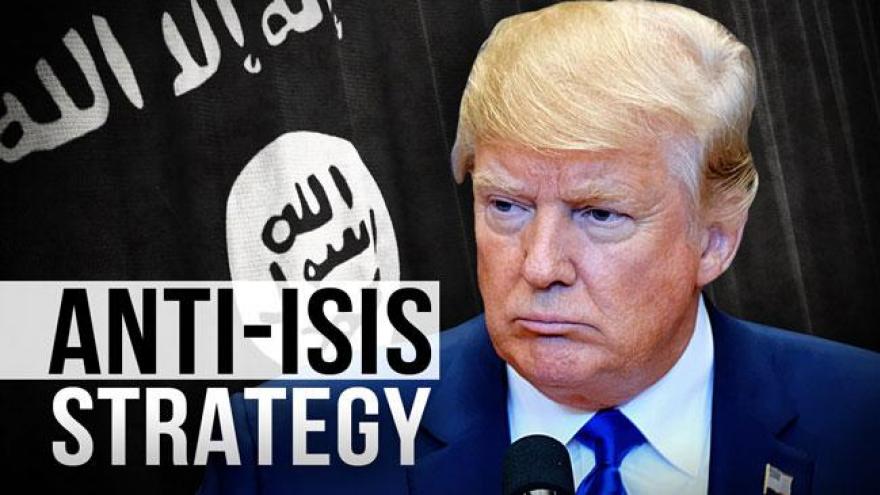 WASHINGTON (CNN) -- The Pentagon has sent President Donald Trump what it calls a "preliminary framework" for options to ramp up the US battle against ISIS, in a plan he requested in order to make good on his campaign vow to crush the extremist group.

Trump called for the new blueprint to defeat ISIS in Syria and Iraq a month ago, and the document details possible military, diplomatic and financial measures to increase US engagement in the campaign, a US official said.

A "principals committee" of top administration officials will meet Monday afternoon to discuss the way forward in the fight against ISIS. It was not immediately known if Trump would attend the meeting. Defense Secretary James Mattis is scheduled to lead the discussion.

Trump repeatedly vowed during his presidential campaign to intensify the fight against ISIS that began under the Obama administration.

"The situation with ISIS has to be dealt with firmly and strongly," Trump told CNN's Anderson Cooper in a 2015 interview in which he also vowed to "bomb the hell" out of oil fields in areas under ISIS control.

Details of the new ISIS plan were not immediately available. But CNN learned earlier this month that the possibility of sending conventional ground combat forces into northern Syria for the first time could be among the options presented. US officials emphasized that any American troops put into Syria would not be in direct combat, but would provide combat support such as artillery units.

The move would significantly stiffen US military operations in Syria and could put troops on the ground within weeks in an effort to speed up the ISIS fight if Trump gives the go ahead.

Until now, only small teams made up largely of Special Operations forces have operated in Syria, providing training and assistance to anti-ISIS opposition groups on the ground.

Conventional units operate in larger numbers and would require a more significant footprint to provide security both on the ground and in the air.

The Obama administration stopped short of injecting combat troops into Syria because of the inherent risks involved and a reluctance to get drawn deeper into wars in the Middle East.

The new Trump administration approach will debut with ISIS under increasing pressure in its self-declared caliphate. Iraqi forces last week captured the airport in Mosul, Iraq, while ISIS' territorial footprint has also been eroding in Syria.

At his confirmation hearing in January, Mattis was not asked about putting more troops into Syria, but he did explain how he would seek to change US military efforts in Iraq and Syria from the Obama administration.

"I think it's getting there as rapidly as possible, where it would be a more accelerated campaign," Mattis said.

Sending troops to Syria is just one of several ideas under consideration for presentation to the President, officials said. Another option could be to do away with limits on the numbers of US troops stationed in Iraq. The Obama administration specified that no more than 5,262 troops would be allowed in the country.

Last week, Gen. Joseph Dunford, chairman of the Joint Chiefs of Staff, said the military was considering a commitment to a long-term presence in Iraq to stabilize the country after the anticipated defeat of ISIS.

"We have, as has NATO, begun a dialogue about a long-term commitment to grow the capacity, maintain the capacity of Iraqi security forces, but no decisions have been made yet," Dunford said at the Brookings Institution.

Such an approach would contrast with former President Barack Obama's campaign promise and decision to pull all troops out of Iraq -- a withdrawal he completed by the end of 2011.

Obama later had to send some troops back to the country due to the rise of ISIS, but his administration did not hide its reluctance to embrace larger-scale deployments.

Dunford said last week that the new war plan was also expected to address ISIS franchises outside of Syria and Iraq, including in Yemen, Libya and Afghanistan.

He also raised the need to consider the views of regional players, such as key American ally Turkey, which opposes US-backed Kurdish groups currently carrying out some of the most effective fighting against ISIS in Syria.