People in Michiana heading out of town, biggest increase since 2007 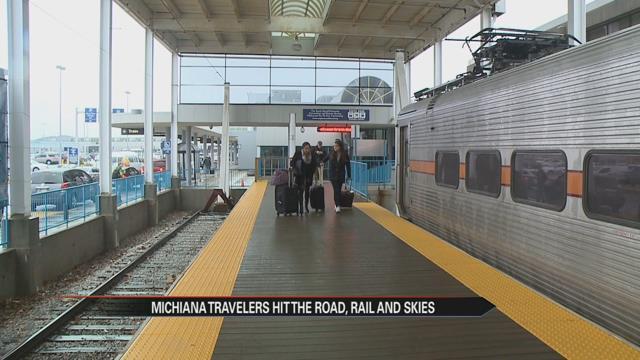 It’s that time of year again! According to Triple A, 48 million Americans travel at least 50 miles or more making this year the busiest Thanksgiving  in nine years and families all across Michiana are part of that number.

Michiana residents started leaving town early. At South Bend International Airport, there’s never much of a TSA line but still people wanted to make sure nothing delayed their trips.

Those taking the South Shore  and people taking the Toll Road or Bypass say they're glad they're beating the chaos.

“Especially for complications, because there’s a possibility for delays and cancellations so coming years saves you the trip of having to reschedule,” said Jenni Gill a traveler

On Wednesday morning this airport was calm, with family members like Gill leaving town. Executive Director of the airport Mike Daigle tells ABC57 they have a booked schedule for the afternoon and by the end of the day.

Daigle says holiday season traveling started on Monday and goes through Wednesday. Slows down on Thursday, but picks right back up by the weekend.

“We’ll have a lot of people coming back home from spending time with family and friends,” he said.

And that’s what families here in Michiana say their looking forward to!

“Excited to spend this holiday with family,” said Nancy Wilson another traveler.

Daigle says nationally the number of travelers is said to increase and Aiden Thorpe, a Notre Dame student said he noticed right away.

“Oh definitely around campus it was hectic people leaving in and out,” said Thorpe.

Despite the rain here in South Bend, travelers are ready to start their trips.“It’s a beautiful day, but it’s raining,” joked John Quin a traveler on the South Shore.

Not so much for drivers like Mathew Edwards. He was a little worried about the rain, which is why he stopped to pump gas before getting on the road.